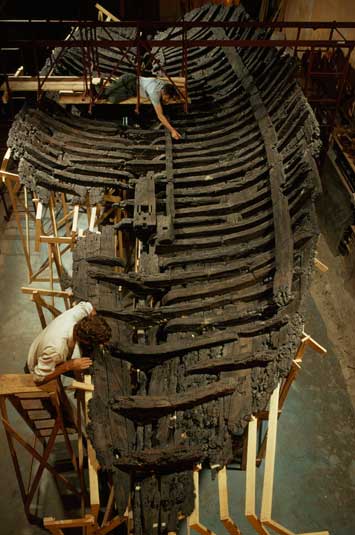 The excavation and recovery of the well-preserved remains of this late-fourth-century B.C. Greek merchant vessel off the coast of Cyprus has yielded substantial information on the construction of classical Greek boats, often seen depicted in paintings on ancient ceramics. The archaeology, led by the late Michael Katzev and now being completed by Susan Katzev, showed that sometime around 306 B.C., the ship, with a four-person crew from Rhodes, was overcome and sank in what seems to have been a pirate attack that left eight iron spear points embedded in the hull. This nearly two-thousand-year-old victim is the earliest physical evidence of piracy. After conservation and reassembly, the hull of the Kyrenia ship is now on display in the Kyrenia Crusader Castle on Cyprus. Also, a sailing replica of the ship, launched in 1985 and christened Kyrenia II, was a successful application of experimental archaeology. It has allowed archaeologists to learn much more about the form and handling abilities of these now-vanished ships.