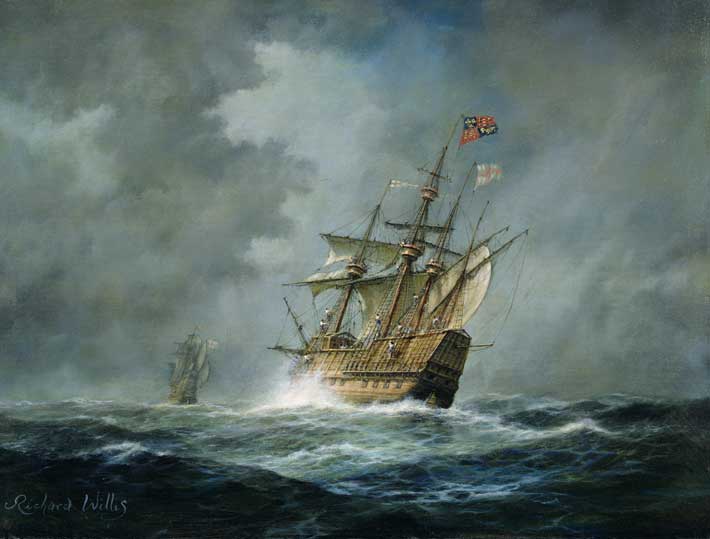 Two massive, well-preserved warships from the sixteenth and seventeenth centuries were the basis of extensive archaeological projects. The recovery and display of these two impressive survivors from the age of the galleon and the rise of sea power offer an unmatched view of ships as a means of national expansion and domination. Each wreck was filled with weapons, provisions, personal effects, and navigational instruments, as well as preserved clothing and the skeletal remains of their crews. Built in 1509–10 and lost when it capsized while going into battle in 1545, Mary Rose was the pride of English King Henry VIII’s fleet. After excavation on the seabed, which revealed the intact starboard side with four deck levels holding 22,000 artifacts, Mary Rose’s hull was raised to the surface for treatment and display in Portsmouth. The hull’s timbers show how the ship, originally built as a floating fortress for archers and short-range fighting, was modified to accommodate new technology: cannons. Those changes made the ship top-heavy, especially when loaded with supplies and men, leading to its demise. Like Mary Rose, Vasa also capsized. It went to the bottom of Stockholm Harbor on its maiden voyage in 1628. Built to carry 64 cannons and a fighting force, the massive and ornately decorated Vasa was the pride of Swedish King Gustavus Adolphus as he built his nation into a global power. Rediscovered intact and buried in mud—preserved by the cold, brackish waters of the Baltic, which are hostile to wood-devouring marine organisms—Vasa was raised in 1961. Excavation of the seabed and the interior of the ship yielded approximately 25,000 artifacts, including some 700 sculptural pieces that were once attached to the hull. The finds document not only the fitting out and armament of the ship, but also the personal possessions of its crew, from the well-off to the poor, and the skeletal remains of men and women, some still wearing shoes and clothing. After decades of conservation and reassembly, Vasa sits in a custom-built museum in Stockholm. To this day, it remains the world’s largest archaeologically recovered ship.