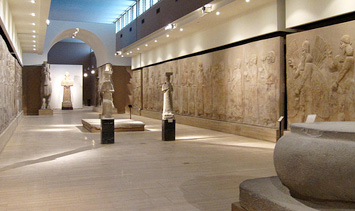 The round hole made by an artillery shell was visible long before we pulled up next to the National Museum in Baghdad in early May of 2003. The puncture, just below a frieze of a king in a chariot, was in the replica of a Babylon gate next to the exhibit halls. An American tank sat in the archway. Though I had seen images of the destruction that took place a month before, the sight was startling.

Inside it was worse. The administrative area was in shambles. Filing cabinets were turned over, and papers dating back to the museum’s founding by British archaeologist Gertrude Bell in the 1920s, were strewn about. Small fires had destroyed some offices. In the display area, angry mobs had shattered the cases and smashed 2,000-year-old statues. The primary storage facility had been breached, and some 15,000 objects—no one knows exactly how many—were gone. Among the missing pieces were thousands of tiny cylinder seals, as well as several iconic artifacts such as the Lady of Warka, a stone head of a woman found at Uruk, which is considered the world’s oldest city.

Had museum officials not hidden 8,366 of the most valuable artifacts in a safe place known only to them, this event might have been a catastrophe for cultural heritage in Iraq. For a while, no one knew for certain how much damage had been done; I was with a team of U.S. archaeologists who arrived to assess the situation. Most of the museum’s estimated 170,000 artifacts were eventually found to be safe. The rampage had earned front-page headlines across the world. It was entirely preventable.

Some 2,500 years earlier, the Persian king Cyrus the Great was able to storm nearby Babylon, then the world’s largest city, but texts from the time relate that there was no chaos or looting. However, in 2003, American troops failed to secure what was second on their own list, after the Central Bank, of important places to protect in the modern Iraqi capital. Archaeologists had visited the Pentagon prior to the invasion to provide military officials with detailed coordinates of all major Iraqi cultural heritage sites.

The looting of the museum was over less than 48 hours after it began on April 10, 2003. But it was only the start of a decade of disaster for Iraq’s cultural heritage, a heritage that includes the world’s first cities, empires, and writing system. More than ancient vases and display cases were affected. The invasion began a grim era of sectarian violence and lawlessness in the very land that developed the state, legal codes, and recorded history itself. That era continues. “These are still very tough days,” says Abdul-Amir Hamdani, an Iraqi archaeologist who today is working on a doctorate at the State University of New York (SUNY) at Stony Brook. I first met Hamdani in May 2003 on the sidewalk outside U.S. military headquarters in the southern city of Nasiriya, where he was desperately attempting to get help to stop the vandals poaching ancient sites. “There is still nothing protecting many sites from looting and destruction.”

Looting, particularly in southern Iraq, which was the center of ancient Mesopotamia, had already begun in earnest in the late 1990s and grew to alarming proportions by 2004 and 2005, long after the National Museum was secured. The United States, its allies, and the fledgling government of post-Saddam Iraq did little to address the sources of the problem. Looting notwithstanding, Hamdani says that today’s principal threat is unbridled development; he served time in jail a few years ago for protesting construction on ancient sites. It is true that, now, foreign archaeologists are working in the northern part of Iraq called Kurdistan. A few western excavators are even digging in the southern regions that have long been off-limits. Looting at archaeological sites has decreased. But young archaeologists in the country long ago drifted to other less controversial and more remunerative work as the older generation retired, emigrated, or died.

More ominously, a new generation of Iraqis has grown up without any access to the impressive network of museums across the country that were once crowded with schoolchildren. They know little of their ancient past. Many Iraqi politicians today have a bent toward Islamic fundamentalism that is no friend to secular archaeology. Liwaa Semeism, the tourism minister overseeing the State Board of Antiquities, is a member of a splinter Shiite party. He has reduced the board’s authority and is openly hostile to foreigners. American archaeologists are now forbidden to excavate in Iraq until a trove of Jewish artifacts removed by the U.S. government is returned. And Semeism recently suggested that Germans might not be welcome either until the famous Babylonian Ishtar Gate—the model for the National Museum gateway—is returned.

The National Museum of Iraq today has beautifully renovated galleries and state-of-the-art climate control and security systems run by a staff that still consists of a core of underfunded but dedicated curators. But despite all the effort and money lavished on it by foreign governments, the museum remains closed to all but the most senior VIPs in an attempt to protect it. The fear is that throwing the museum’s doors open to the public exposes the collection and the newly-restored building to risk from another attack.

New elections later this month could bring greater political stability to the country. Eventually, as they have done from Nebuchadnezzar to Saddam, Iraqi leaders may again see their heritage as a major asset. “If you want to think about unity, then the ancient past is a broadly shared culture,” says Elizabeth Stone, a SUNY Stony Brook archaeologist who spent years excavating in Iraq. “Ancient Mesopotamia was real, and that could be used as a basis for natural unity.”

Hamdani will be returning to his home country this summer to continue his research. More than half of the stolen objects from the National Museum have been recovered, the gaping hole in the gate has since been carefully patched, and the tanks are gone. It is worth noting that there were no follow-up congressional hearings or independent investigations to pinpoint the parties responsible for the negligence connected to the museum debacle. No one in the U.S. military was criticized, demoted, or court-martialed. A Marine, who blamed Iraqis for using the site as a base to fight the Americans, wrote the only formal report on the matter.

The chaos that engulfed this land may finally be receding. A decade later, however, the true cost to our understanding of such a rich share of humanity’s heritage has yet to be tallied.