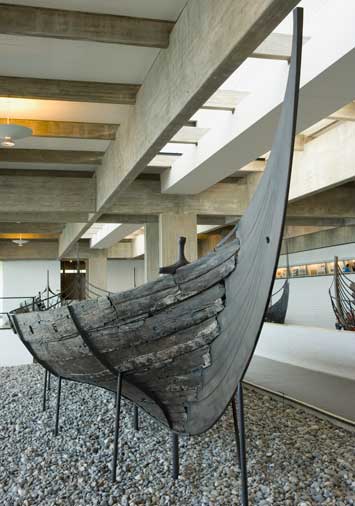 Starting in 1962 and continuing with more recent recoveries, a group of eleventh-century Viking ships have been lifted out of the shallow waters off Roskilde, a former capital of Denmark. The ships, ranging from common cargo carriers to warships, had been filled with stone and sunk to block a sea channel from invaders. The finds, and the analysis and reconstruction of the ships led by the late Ole Crumlin-Pedersen, provided the world with its first detailed look at a range of Viking craft separate from the more ornate royal craft discovered in ship burials on land. The Skuldelev ships speak to sophisticated shipbuilding as well as extensive specialization. Their discovery has helped to overturn the commonly held stereotype of a “Viking ship” as a large dragon-beaked warship lined with shields. The work on the Skuldelev ships has included the creation of sailing replicas and helped drive resurgent interest in the Vikings as diverse and skilled traders, explorers, and warriors with a command of the seas. Starting with Skuldelev and continuing with finds in former Viking ports such as Dublin, Ireland, archaeology has rewritten Viking maritime history.