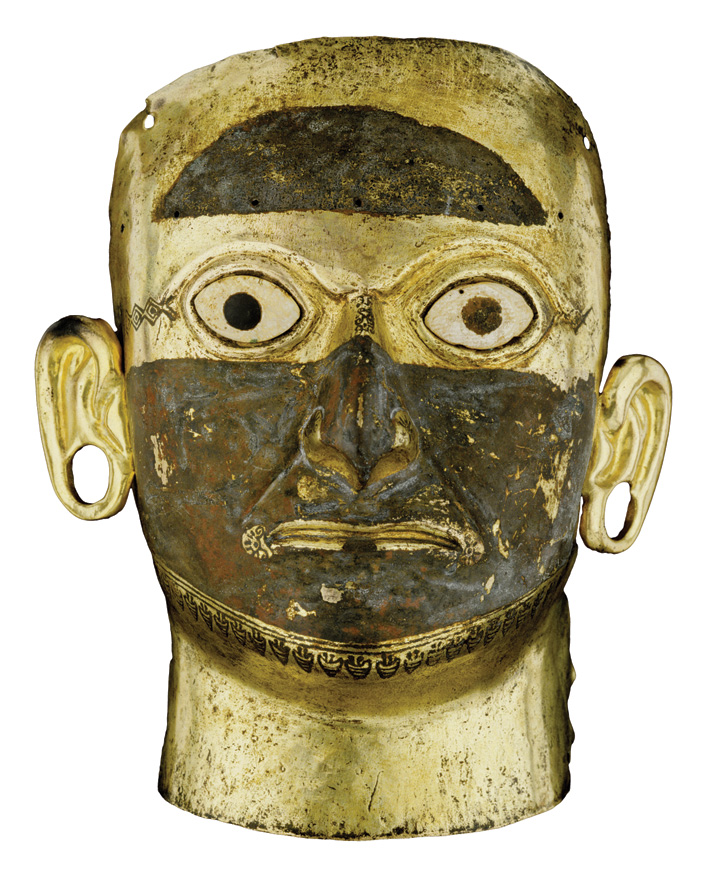 The Moche culture of ancient Peru is noted for elaborately decorated ceramics, goldwork, textiles, and murals—and people. While actual physical evidence of tattooing is rare, there are a great number of artifacts indicating that tattooing was likely a common and esteemed practice in the Moche world, according to Edward Swenson of the University of Toronto. Swenson believes that while it’s possible that the markings on the gold mask (left), for example, may represent actual tattoos, they more likely may be stylized “faux” tattoos that were not inscribed on the face of the deceased buried with the mask but, rather, were symbolic of his identity and life force. One interesting motif that is often found is a string of pupating flies ringing the neck, which Swenson believes symbolizes death and rebirth. “If the fly necklace can be interpreted as a kind of tattoo, then I would suspect some individuals were tattooed in important life-crisis rituals, such as after initiates successfully achieved a new social or ritual status,” explains Swenson. “Similarly, shamans are often depicted with anthropomorphized animals, perhaps suggesting their ability to shape-shift in states of trance.” Animals, both realistic and supernatural, also adorn the body of the “Lady of Cao” (top), a well-preserved mummy found at the site of El Brujo in 2005. Her tattoos include stylized catfish, spiders, crabs, felines, snakes, and a supernatural being commonly called the Moon Animal. “We can only speculate about the meaning of these motifs,” says John Verano of Tulane University, who excavated the mummy with El Brujo Project and Museum director Régulo Franco. “But spiders are associated with rain, as well as with human sacrifice and death, and the serpent is an important element associated in many ancient Andean cultures with deities, fertility, and human sacrifice as well,” adds Verano. “Tattoos may very well have been embraced for aesthetic reasons in Moche society, but they probably also played a fundamental role in facilitating transformations into new states of being,” says Swenson.