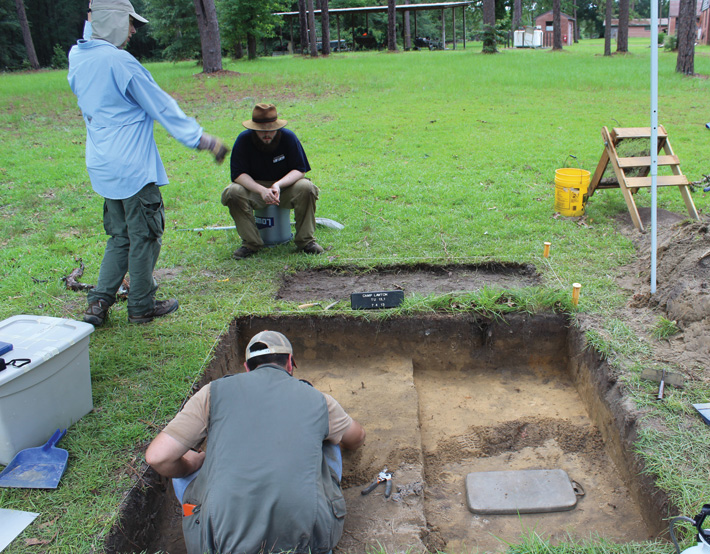 Camp Lawton is unique among Civil War prisons because the remains of its stockade are largely undisturbed. Its condition offers the Georgia Southern team investigating the camp an unprecedented opportunity to learn about its boundaries and construction, and about those who built it.

Graduate student Hubert Gibson is excavating on the park side of the prison site, looking at trenches that were dug to accommodate the stockade. “We know from oral histories and newspaper accounts that approximately 500 slaves and 300 prisoners worked here,” Gibson says. These slaves would have been conscripted from nearby plantations to help fell trees, dig trenches, and secure the 15-foot-tall stockade posts with backfill. By comparison, Gibson explains, there is more information about prison construction at Andersonville. Archaeologists know, for instance, that prisoners built the northern extension of that stockade and that slaves did the rest. Their work, Gibson notes, was better. “I think most of the slaves were from the local area, and their experience working on irrigation ditches, fence posts, and other agricultural landscaping would have promoted familiarity with soil composition and a knowledge of good construction techniques in local soils.”

At Camp Lawton, that same knowledge was critical. The portions of the pen on the Magnolia Springs State Park side of the site were likely easy to erect, as there is plentiful Georgia red clay a few feet below the soil that could have been used to stabilize the posts. Stockade remains on the Federal side, Gibson says, show that that location presented more of a challenge. “On the Federal side, the clay content is very low. Most of the soil is a coarse sand,” he says. “You could dig two meters into the ground and not hit clay.” The slaves, he continues, likely carted clay over to these areas to stabilize posts, which is evidenced by a foreign clay layer packed next to where Federal side posts once were. “It is evident,” Gibson says, “that slave laborers were thinking about obstacles to construction and how to solve them.”