A group of Italian caving enthusiasts, investigating a small hole in the ground concealed by bushes, discovered surprising information about the inner workings of ancient Rome’s most impressive imperial residence. Hadrian’s Villa is located in Tivoli, 15 miles east of Rome. Construction on the site began in A.D. 118, a year after Hadrian became emperor, and was completed a decade later. Some time ago, archaeologists realized that there was a network of roads under the estate, says Marco Placidi, director of Underground Rome, the group that made the discovery. “As we explored the roads, we discovered another world,” he says. “The villa’s grandeur is reflected underground.”

Many parts of the estate, which once covered 600 acres, were designed by Hadrian himself, and were based on famous buildings in Egypt and in Greece. The site is organized like a city, complete with palaces, libraries, thermal baths, theaters, courtyards, and landscaped gardens watered by canals and fountains. In its day, the villa’s subterranean world would have bustled with the activity of people charged with running the sprawling imperial palace as smoothly and quietly as possible. Tunnels and passageways allowed thousands of slaves to move discreetly from the basement of one building to that of another, enabled the movement of ox carts loaded with food and goods destined for underground storage, and accommodated sewers and water pipes. “These underground passageways have long been known,” says Benedetta Adembri, the director of the site. But Placidi’s team has discovered a new tunnel double the width—an astonishing 19 feet wide—of any previously found. This roadway would have allowed for two-way traffic. 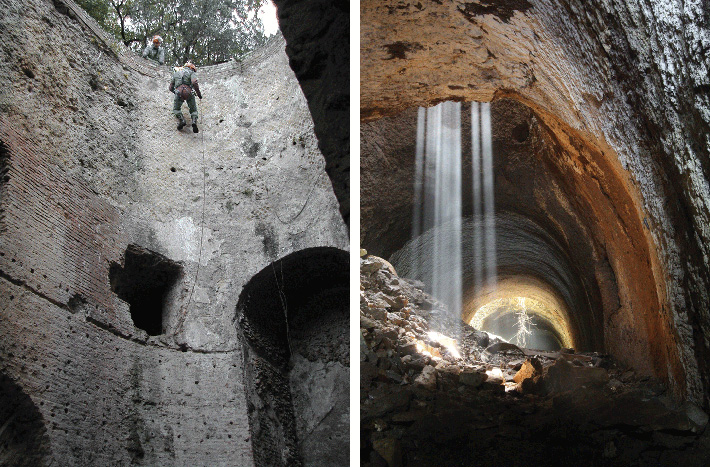 Although the newly discovered tunnel is filled with debris nearly to the roof, the team, using a remote-controlled robot equipped with a camera, determined that it runs nearly straight, at least as far as the robot can go. “But,” says Placidi, “we can only imagine where this new road ends.”

Consisting of volunteer speleologists trained in archaeological research, Placidi’s group has worked at Hadrian’s Villa since 2001, thanks to an agreement with Italian heritage authorities. The team’s results demonstrate that amateurs and archaeologists can collaborate successfully—so long as it is done carefully. “Sometimes amateurs can do damage, but that’s not our experience. These volunteers are certified speleologists who scrupulously follow scientific protocol and work under the direction of our archaeologists,” Adembri says. Given the lack of funding plaguing Italian archaeological projects, Placidi’s group “provides valuable help, indeed,” he adds. Adembri hopes to open part of the tunnels to guided tours this year.