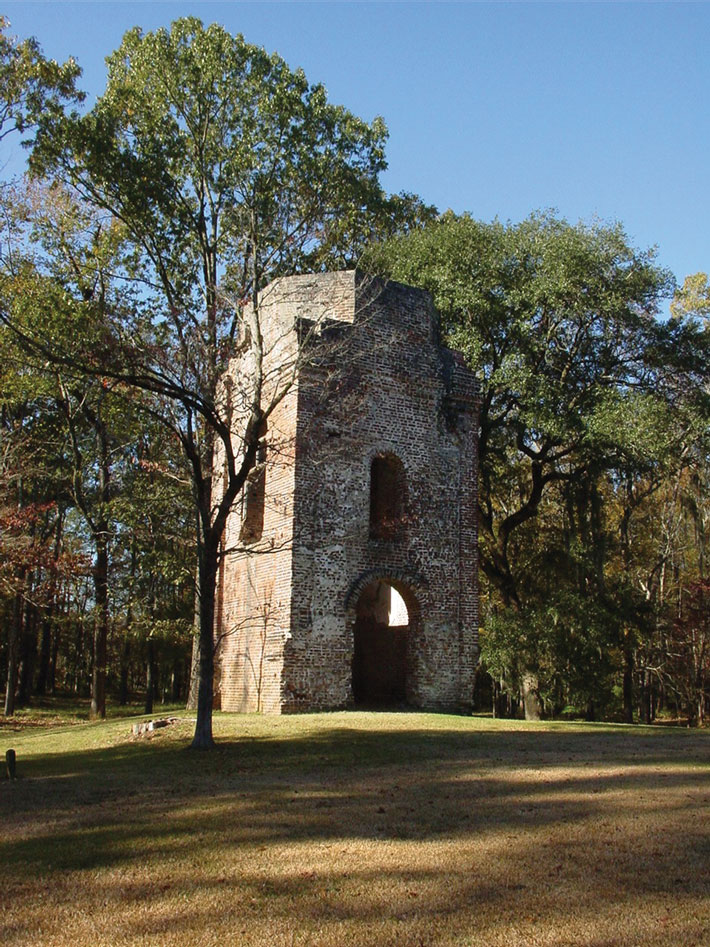 The remains of Dorchester in Summerville, South Carolina, contain one of the most complete archaeological records of colonial America anywhere. Dorchester was founded in 1697 by a group of New England Puritans representing the Congregational Church of Dorchester, Massachusetts. For nearly a century, the village was inhabited by traders, planters, artisans, and wealthy owners of local plantations, and prospered as an inland trade center on the north side of the Ashley River. At the beginning of the Revolutionary War, Dorchester became a fortified American post, briefly commanded by Francis Marion, known as the Swamp Fox. The British claimed the post near the war’s end, only to turn it over to the Americans again. Shortly thereafter, the village was abandoned and left in a ruinous state until archaeological excavations began in the 1940s and then continued more formally in the 1970s. South Carolina state archaeologist Jon Leader says that Colonial Dorchester “has everything.” The site hosts public archaeology excavations in the spring and fall that visitors can observe and even participate in, and there is an indoor lab that can be visited in winter and summer. It’s also a great site for a picnic.

Dorchester is unique because it was an interior trade town, unlike Charleston, which is on the coast. Trails and signs guide visitors through the intact remains of the old town, including the brick bell tower of St. George’s Anglican Church, a fort made of oyster-shell concrete called tabby, and part of a log wharf that’s visible at low tide. Excavations have unearthed undisturbed evidence of eighteenth-century village life just below the surface—pipe stems, bowl fragments, historic bottle and window glass, metal buttons, ammunition for hunting, and a variety of European and slave-made pottery sherds. Revolutionary War artifacts have also been identified, such as a British military insignia of shiny brass. Many of these artifacts were found and sorted by volunteers, who sifted through thousands of pounds of brick and mortar rubble. For all that has been discovered, much more remains underground—of 119 quarter-acre lots on the site, fewer than 10 have been investigated, according to site archaeologist Larry James. Just one of these lots recently yielded 6,500 artifacts.

Colonial Dorchester is just minutes from downtown Summerville, which offers education, culture, and more at places such as the Summerville Dorchester Museum and numerous antique shops. Guerin’s Pharmacy, the oldest in South Carolina, is a great place for refreshments. (Summerville is famed for its sweet tea.) Also, the gardens, waterfront, historic buildings, and museums of Charleston are just 25 miles away.