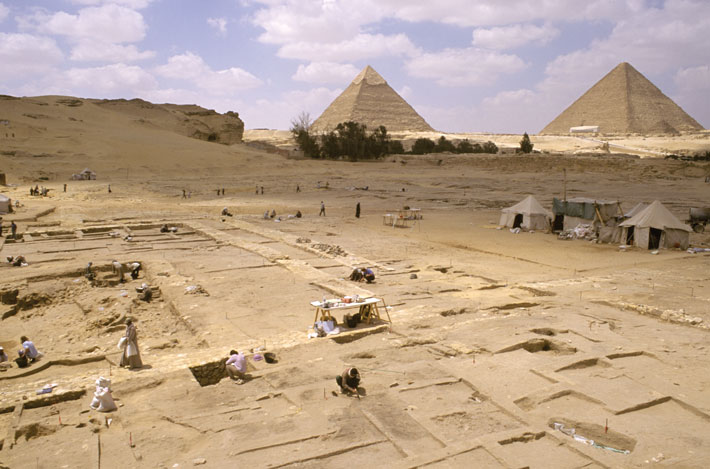 Sometimes great discoveries are made when archaeologists stop digging and take a closer look at what has already been found. This is what happened to Mark Lehner, director of Ancient Egypt Research Associates, as he was looking over maps of Heit el-Ghurab, where he has worked for 25 years. Lehner had thought that Heit el-Ghurab, a 4,500-year-old town next to the pyramids of Giza, was home to the workers who built the pyramids. But now he believes the town was also a wealthy Nile River port.

While examining the distribution of wood and pottery in a part of the town where laborers lived, Lehner recognized that much of it came from the Levant. He surmised that the laborers who built the pyramids were probably also sailors and that Heit el-Ghurab was probably the southern end of an important trade route called the Byblos Run, which brought lumber, olive oil, and other trade goods from territories as far north as modern-day Lebanon. “It’s a whole consilience of different lines of evidence that brought us to this aha moment,” says Lehner.

This rich port also had its own elite class. In the western part of the town, Lehner’s team found leopard teeth, which were worn as ornaments by certain Egyptian priests. The archaeologists also uncovered the bones of calves—veal would have been an especially prized luxury. 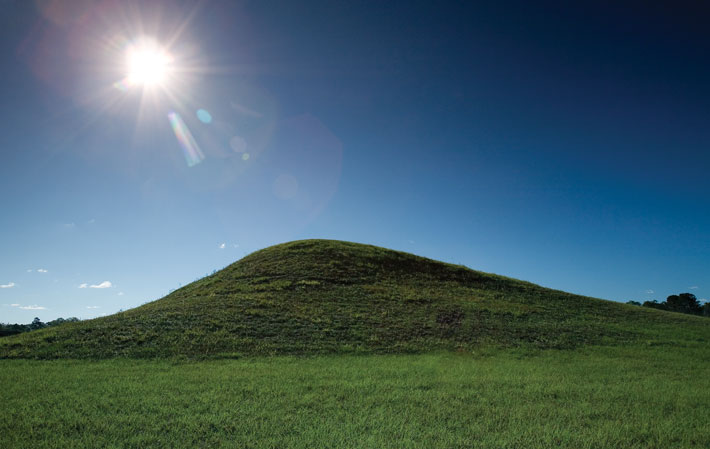 More than 1,200 years ago, a group of Caddo Indians called the Hasinai established a village in present-day Cherokee County, Texas, where they found good soil, a teeming forest, and nearby springs. Today the site, known as Caddo Mounds State Historic Site, is one of the best known and intensively investigated Native American sites in Texas. It is the southwesternmost ceremonial center of the Mound Builder culture, who flourished in the woodlands to the east from 1000 B.C. to A.D. 1550. The site was abandoned in the thirteenth century, but its spirit lives on in the modern Caddo Nation based in Oklahoma and in the name “Texas,” which comes from a Caddo word meaning “friend.” Archaeol-ogist Brett Cruse of the Texas Historical Commission says, “It was a major early Caddo center, and perhaps no other Caddo site has had as great an impact on what we know about them.”

Visitors today can see three earthen mounds and a large portion of where the village was situated, estimated at more than 110 acres. Two mounds are platform temples that were used for political and religious ceremonies. The third is a burial mound containing several dozen tombs of community leaders, some of whom appear to have been accompanied by sacrifices. The associated village includes residences of common people, granaries, and garden plots. Archaeologists have learned a great deal about Caddo culture from excavations at the site. For example, residences in the village, dating to as early as A.D 850, were organized into compounds with small courtyards. The form persisted for several hundred years, demonstrating great continuity in Caddo community and social organization. Within special areas near the temple mounds, excavators have also uncovered evidence of a series of large public buildings that probably served as temples, council or clan houses, and perhaps residences of community leaders. Outside these areas were smaller houses that had been built and rebuilt in the same place for generations. A self-guided tour of the site can take about an hour, and there is a visitor’s center museum that exhibits about 200 artifacts, including pottery, tools, and weapons. 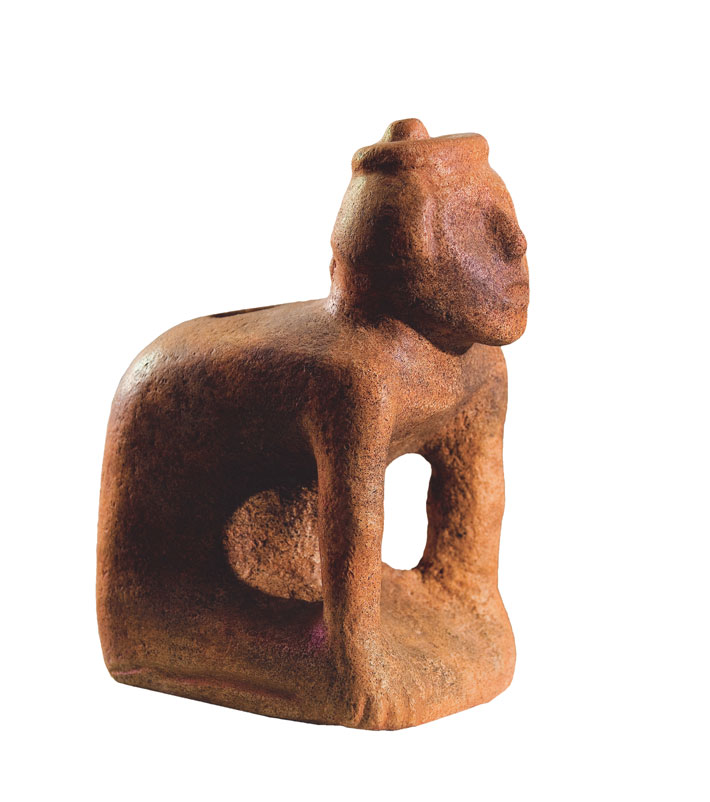 Six miles west of Caddo Mounds is Mission Tejas State Park, a 660-acre park with camping, hiking, and fishing, as well as a representation of Mission San Francisco de los Tejas, the first Spanish mission in the province of Texas, established in 1690. Just 18 miles away is a depot of the Texas State Railroad, which runs historic train engines and cars several days a week. The historic downtown of Nacogdoches, 26 miles away, offers several historical museums, food, shopping, and nightlife.

The Sant’Omobono archaeological site in Rome isn’t much to behold. It is strewn with a seemingly haphazard array of stone blocks, walls, ditches, and the occasional column drum—hardly pleasing to the eye. Even the eponymous Renaissance church that sits atop the site has been labeled as “incongruously ugly” by one prominent archaeologist. So it’s not surprising that tourists on their way to better-known monuments scarcely give it a second look.

This past January, however, the site suddenly received a great deal of attention when multiple international news sources reported incorrectly that Rome’s oldest temple had just been discovered there. As the archaeologists of the Sant’Omobono Project, an ongoing collaboration between the Superintendency of the Capitoline, the University of Calabria, and the University of Michigan, had actually made clear, this temple has been known—although rarely seen—since the 1930s, when it was first discovered.

Beneath Sant’Omobono lies a series of religious buildings that defined the site for much of the first millennium B.C. The importance of this area, situated at a bend in the Tiber River and known as the Forum Boarium, or “cattle market,” stemmed from its location at the nexus of several ancient communication and trade routes. It was the economic center of early Rome, complete with the city’s earliest river harbor capable of providing a safe haven for ships, and an international marketplace where goods, as well as cultural ideas, religions, and languages, were exchanged. It was also a prime location for the construction of a temple to protect and oversee this activity. “The [Sant’Omobono] site is crucial for understanding the related processes of monumentalization, urbanization, and state formation in Rome in the late Archaic period,” says Dan Diffendale, a member of the University of Michigan team. The site’s main archaeological features are the twin temples of Fortuna and Mater Matuta, which date to the late sixth or early fifth century b.c. Although these are among the oldest temple remains in ancient Rome, they actually sit atop an even older structure. This is the ancient Archaic period (roughly 800–500 B.C.) temple that January’s reports referred to. 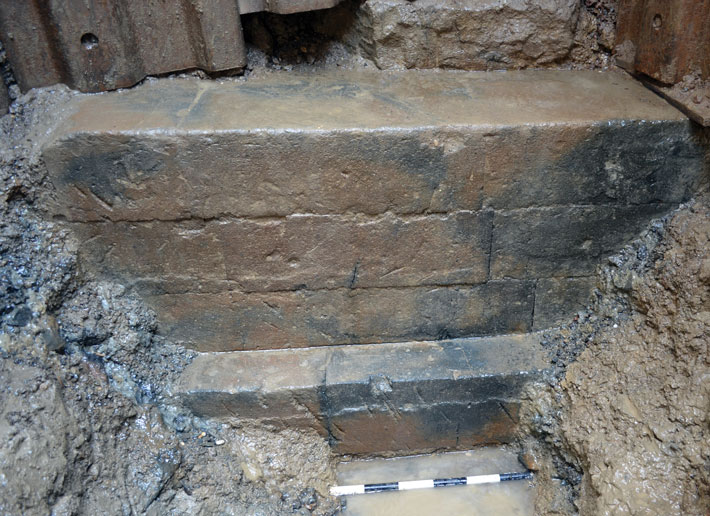 This structure has been notoriously difficult to evaluate, because it lies deep beneath the ground, well below the city’s water table. Now, however, the Sant’Omobono Project has finally been able to get a glimpse at the early temple’s foundation. In order to achieve this, steel retaining walls were hammered into the ground to hold back the weight of the waterlogged soil, and mechanical pumps were then used to drain the trench. At a depth of more than fifteen feet, three courses of stone blocks belonging to the ancient temple were identified. “We were able for the first time to record the Archaic foundation with modern means, using total station and photogrammetry, as well as extensive photography,” says Diffendale. “This is the first time that the Archaic podium has been exposed in relatively dry condition.”

In addition, the Sant’Omobono team was able to recover hundreds of artifacts, including votive offerings, drinking vessels, and figurines. These suggest that the temple dates to the late seventh and early sixth centuries B.C., making these the oldest known temple remains in Rome. For safety reasons, the trench could stay open for only three days before it was backfilled. Nevertheless, this latest round of work will have long-lasting effects on archaeologists’ study of the development and growth of the eternal city. The Sant’Omobono site has finally gained its rightful place in the spotlight as one of ancient Rome’s most important, even if least well known, sites.