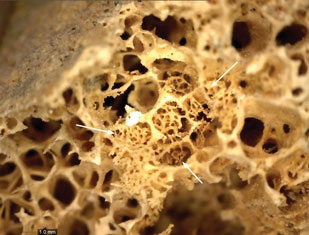 In a tomb in northern Sudan, archaeologists have discovered the earliest complete skeleton of a human who suffered from metastatic cancer—cancer that has spread throughout the body. The skeleton, which belonged to a young man who died around 1200 B.C., was riddled with lesions caused by cancer of an unknown organ. A team led by Michaela Binder of Durham University analyzed the lesions using X-rays and digital and scanning electron microscopy, and ruled out alternative causes, such as fungal infection or postmortem changes.

Cancer has been thought to be a largely modern disease that results in part from longer life spans, exposure to pollutants and unhealthy food, and lack of physical activity. Also, few ancient skeletons bear evidence of cancer, but this may be because the victims died rapidly, before the disease could leave a mark on their bones. The new find adds to evidence that the disease existed, and may even have been common, in antiquity. The site, called Amara West, has been studied since 2008, with excavations in the ancient town and cemeteries. Researchers hope that an understanding of the surrounding community will offer a window into the causes of cancer in ancient populations.