Pentridge Prison, in the suburbs of Melbourne, Australia, saw continuous use as a place of confinement and punishment for almost 150 years, from the 1850s until its closure in 1997. Portions of the sprawling complex have been slated for development, so recent years have seen a flurry of archaeological excavation, which turned up, among other things, the remains of the country’s most notorious outlaw and bushranger, Ned Kelly (“Final Resting Place of an Outlaw,” September/October 2012).

The latest finds include the foundations of three panopticon-style exercise yards. These rare, pie-shaped structures would have allowed prisoners in solitary confinement—who were forbidden any form of communication—to walk outside for brief periods, observed at all times by guards in a central tower. The concept was based on the theories of English philosopher Jeremy Bentham, who characterized this constant observation as a means to control inmate behavior, calling it “a new mode of obtaining power of mind over mind.” “The ‘separate system’ [as the solitary punishment was known] was short-lived, mainly because it was very expensive, as well as sending all the inmates nuts, so these very unusual buildings are few and far between,” says archaeologist Adam Ford of consulting firm DIG International. 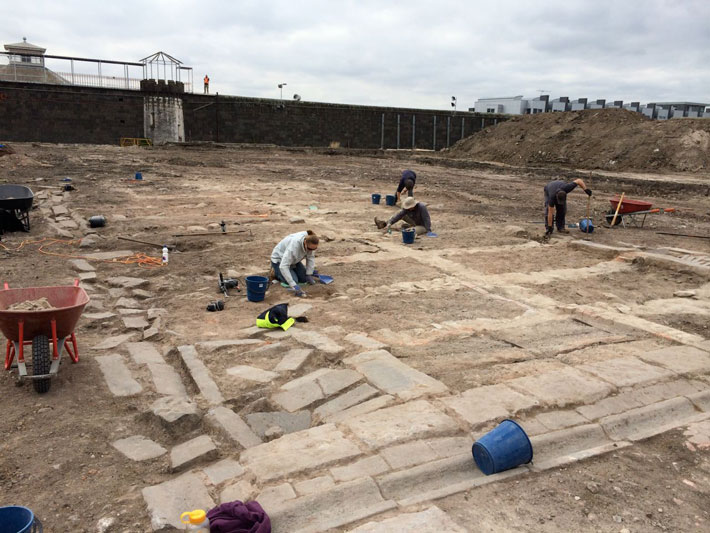 The excavations have also revealed the foundations of the prison’s C Division (left), where the prisoners allowed to use the panopticons were held alone in 3-by-10-foot cells—among them a young Kelly. “These give a vivid image of the tiny and squalid conditions of the condemned in the 1880s,” says Ford, “and were still used until the mid-1970s.”