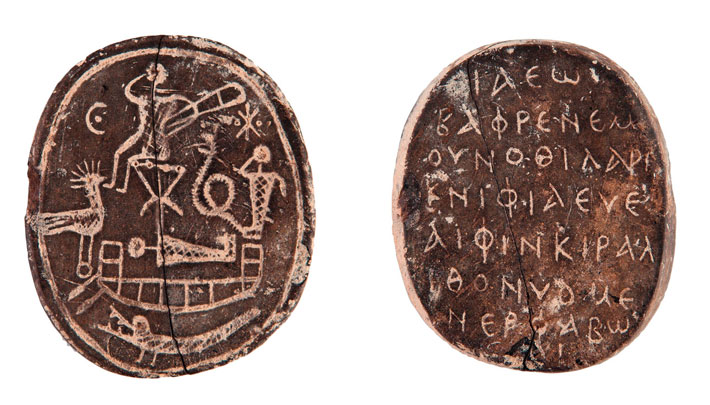 In the world of Late Antiquity, even centuries after the arrival of Christianity in the Roman Empire, there is ample evidence of the persistence of millennia-old pagan religions alongside the new faith. At the site of Nea Paphos, the capital of Cyprus in the Hellenistic and Roman periods, a city with strong traditions of pagan magic, archaeologists from Krakow’s Jagiellonian University have found an artifact that provides an intriguing example. One side of the amulet depicts a scene familiar from ancient Egyptian religion: Harpocrates, who symbolized the morning sun and the daily and yearly rejuvenation of nature, alongside the mummified god Osiris, the ruler of the dead and symbol of resurrection and eternal life. Although the scene’s iconography, including the animals representing good and evil and the celestial motifs, is based on Egyptian sources, project archaeologist Joachim Śliwa says that the artist who created the amulet didn’t fully understand the images’ significance, as they are fairly unskilled and schematic.

According to Śliwa, the craftsman expended more of his efforts on the other side, which boasts a carefully executed example of an ancient palindrome from a later period. The text is an eight-line inscription, consisting of 59 Greek letters, that reads: “Iahweh is the bearer of the secret name, the lion of Re secure in his shrine,” a phrase known from numerous ancient magical papyri and inscribed gemstones that ordinarily appears with depictions of a solar god. The images of the Egyptian gods and their connection to magical papyri on the same artifact as a phrase mentioning the Judeo-Christian deity, Yahweh, speak to a complex world where traditions endured long after they ceased to be part of the official state religion.