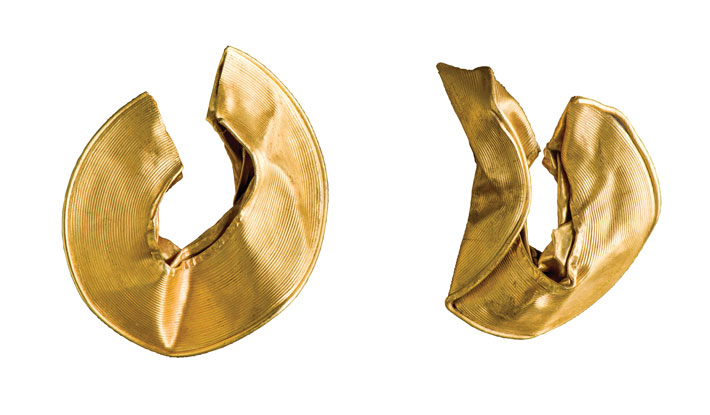 During the Late Bronze Age in Europe, well before the use of coins as currency, finely worked metal objects were both portable forms of wealth and signs of elevated status. Artifacts ranging from gold adornments worn by elite members of society, to massive bronze cauldrons for use in feasts intended to maintain allegiances through periods of endemic small-scale warfare, have been found across Europe. These expertly decorated gold rings found in Wales are superior examples of this type of significant object.

Called lock-rings because they may have been used to hold hair, the small golden rings are crushed after nearly three millennia underground, but once had a cone-shaped opening at each end. Although found at different times, they were likely worn as a pair and buried together in a single hoard in a region known as a “hotspot for the use and burial of gold ornaments during the Bronze Age,” says Adam Gwilt, principal curator of prehistory at Amgueddfa Cymru–National Museum of Wales.

Yet it was not just in life that items such as the lock-rings were valued. “We think these types of prized gold objects were carefully buried in isolated locations, and especially places associated with water, as gifts to the gods, perhaps at the end of the lives of their owners,” says Gwilt. “It seems that prestigious items were returned to the ground or water, rather than recycled or inherited, suggesting a time of abundance and a particular burial custom.”