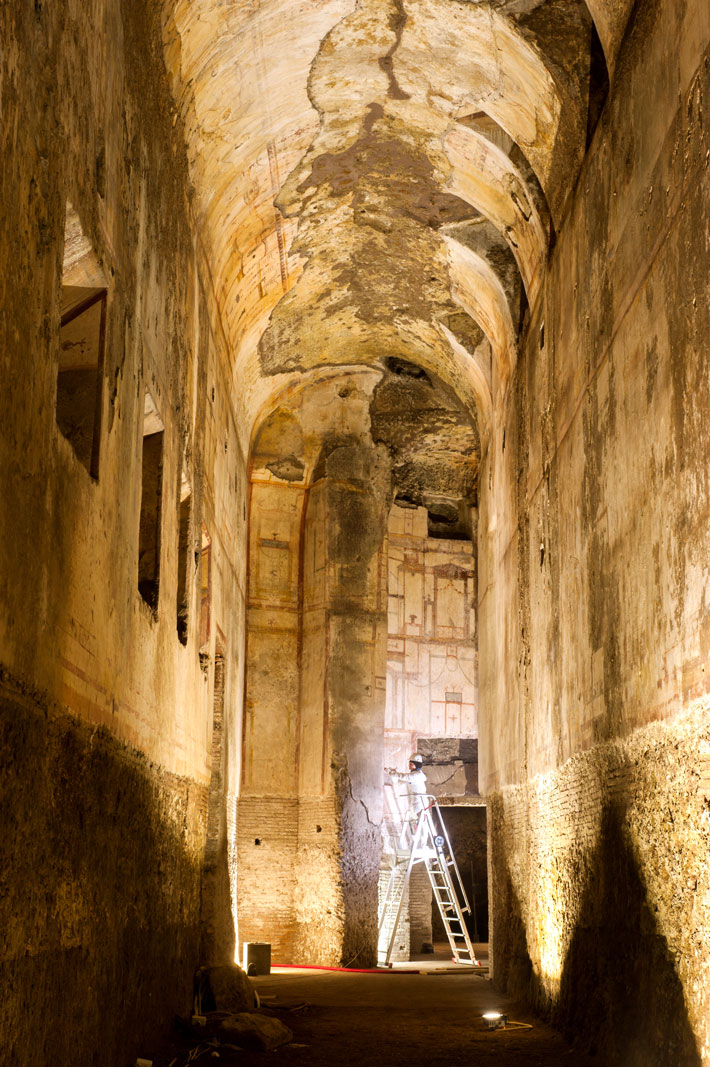 In no other matter did he act more wasteful than in building a house that stretched from the Palatine to the Esquiline Hill, which he originally named “Transitoria” [House of Passages], but when soon afterwards it was destroyed by fire and rebuilt he called it “Aurea” [Golden House]. A house whose size and elegance these details should be sufficient to relate: Its courtyard was so large that a 120-foot colossal statue of the emperor himself stood there; it was so spacious that it had a mile-long triple portico; also there was a pool of water like a sea, that was surrounded by buildings which gave it the appearance of cities; and besides that, various rural tracts of land with vineyards, cornfields, pastures, and forests, teeming with every kind of animal both wild and domesticated. In other parts of the house, everything was covered in gold and adorned with jewels and mother-of-pearl; dining rooms with fretted ceilings whose ivory panels could be turned so that flowers or perfumes from pipes were sprinkled down from above; the main hall of the dining rooms was round, and it would turn constantly day and night like the Heavens; there were baths, flowing with seawater and with the sulfur springs of the Albula; when he dedicated this house, that had been completed in this manner, he approved of it only so much as to say that he could finally begin to live like a human being.  Suetonius, The Lives of the Caesars

In the mid-first century A.D. there was no building in Rome as sumptuous, ornate, or grand as the Domus Aurea, or “Golden House,” a lavish imperial residence and sprawling park covering hundreds of acres in an area known as the Oppian Hill between the Palatine and Esquiline Hills on the city’s northern side. Constructed by the emperor Nero and born from the ashes of the massive A.D. 64 fire that destroyed the city center and cleared the space that it would occupy—perhaps explaining the persistent suspicion held by many Romans that the emperor himself had set the fire—the vast property had hundreds of rooms. There were walls sheathed in polychrome marble, vaults and ceilings covered in vibrant frescoes by the artist Fabullus, and in precious stones, ivory, and gold, and gardens full of masterpieces of sculpture from Greece and Asia Minor. According to the Roman historian Tacitus, who praises the palace’s architects, Severus and Celer, for having the “ingenuity and courage to try the force of art even against the veto of nature,” what was even more marvelous than the spectacular interiors were “the fields and lakes and the air of solitude given by wooden ground alternating with clear tracts and open landscapes.” 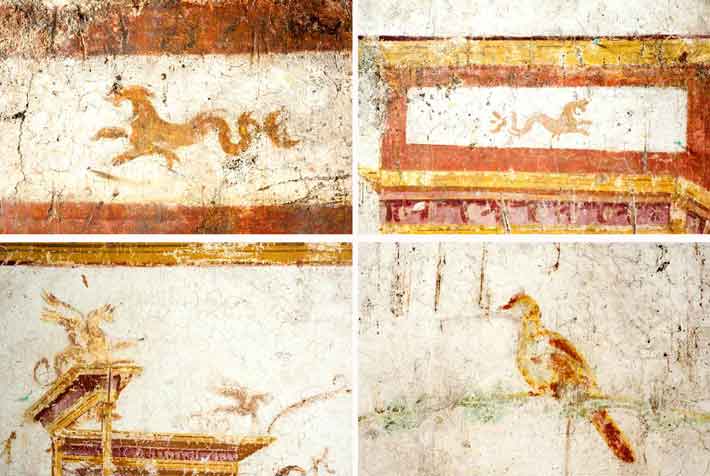 Yet the emperor’s extraordinary palace was never finished, and it stood for only four years—on June 9, A.D. 68, Nero committed suicide after being convinced he was condemned by the Senate to die as a public enemy. His death brought to a close the Julio-Claudian dynasty that had begun with Augustus, and ended a reign distinguished by excessive lasciviousness, cruelty, and violence, and that led to civil war. The next three emperors ruled for only 18 months in total, and all were either murdered or committed suicide. It was not until December of A.D. 69, when Vespasian became emperor, that a period of relative calm that was to last more than a decade began. 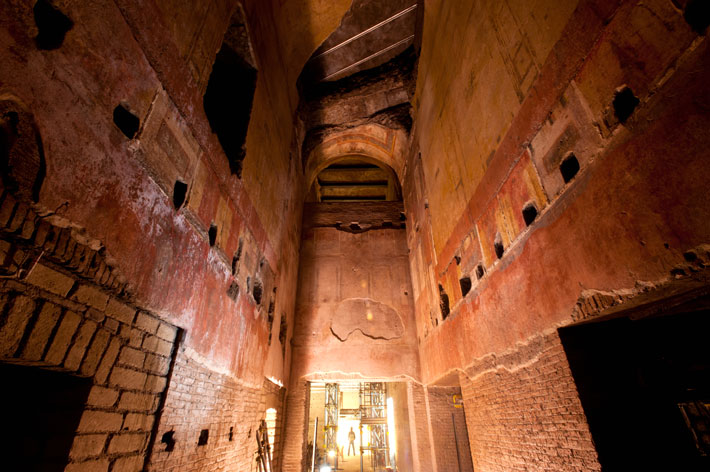 Nero’s successors attempted to obliterate not only the emperor’s memory, but also all traces of the Domus Aurea, and to return to public use, land he had seized for his private projects. Soon Vespasian drained the artificial lake and began construction on the Colosseum. The Colosseum actually acquired its name from the giant bronze statue that Nero had commissioned of himself to resemble the Colossus at Rhodes, one of the Seven Wonders of the Ancient World. In his continuing effort to banish all memory of the disgraced emperor, Vespasian added a crown to the statue and rededicated it to the Roman sun god, Sol. Around A.D. 128, the emperor Hadrian had the statue moved to the northwest side of what was then known as the Flavian Amphitheater—after the new imperial dynasty founded by Vespasian—thus permanently associating the building with the statue, even after the statue itself was gone. The Domus Aurea was stripped of many of its fine decorations, and its vaulted spaces were filled with earth, providing a level surface upon which the massive public baths of the emperors Titus and Trajan were constructed.

After Rome succumbed to invaders in the sixth century, the Oppian Hill was more or less abandoned, leaving the Domus Aurea undisturbed in comparison with much of the ancient city, and preserving what remained underneath for nearly 1,500 years. Even today the monument is invisible on satellite maps. It was not until the late fifteenth century, when a boy fell through an opening in the side of the hill, that the palace’s decoration became well known. Some of the greatest Italian painters, among them Pinturicchio, Ghirlandaio, and Raphael, were lowered by ropes into openings that were originally believed to be caves. Instead, they saw what became the main source of knowledge of the ancient Roman styles of painting that would so heavily influence the art and architecture of the Renaissance. 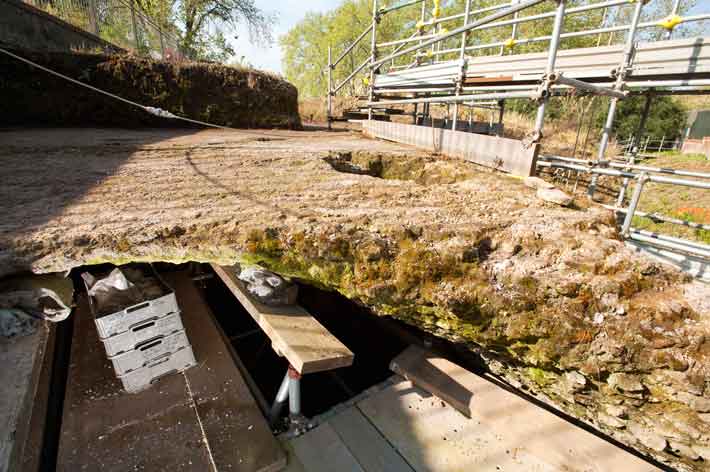 Despite the protection that should have been afforded it by being filled in and covered over so completely, time has not been kind to Nero’s luxurious palace. In the eighteenth century, vineyards covered the Oppian Hill, and in 1871, a large public park incorporating the ruins of the ancient baths was created there. The park was then enlarged during Mussolini’s reign and served as a backdrop for the opening of the newly renovated area around the Colosseum on April 21, 1936—a date that recalls the legendary founding of Rome on the same date in 753 B.C. These decisions were disastrous for the ruins that lay beneath the park. Plant life, including weeds, the roots of ailanthus, acacia, and oak trees, and even a Himalayan pine that, according to very old local residents, was given to Rome by Hirohito, the future emperor of Japan, in 1921, have been infiltrating the cocciopesto (pieces of pottery or brick mixed with lime and sand used as mortar) that holds together the floor of Trajan’s baths and threatens the remains of the Domus Aurea underneath for more than a century. Not only have the plants’ roots, in search of the minerals that abound in ancient mortar, cracked the floor, but chemical compounds released from the roots are also contributing to the cocciopesto’s disintegration. 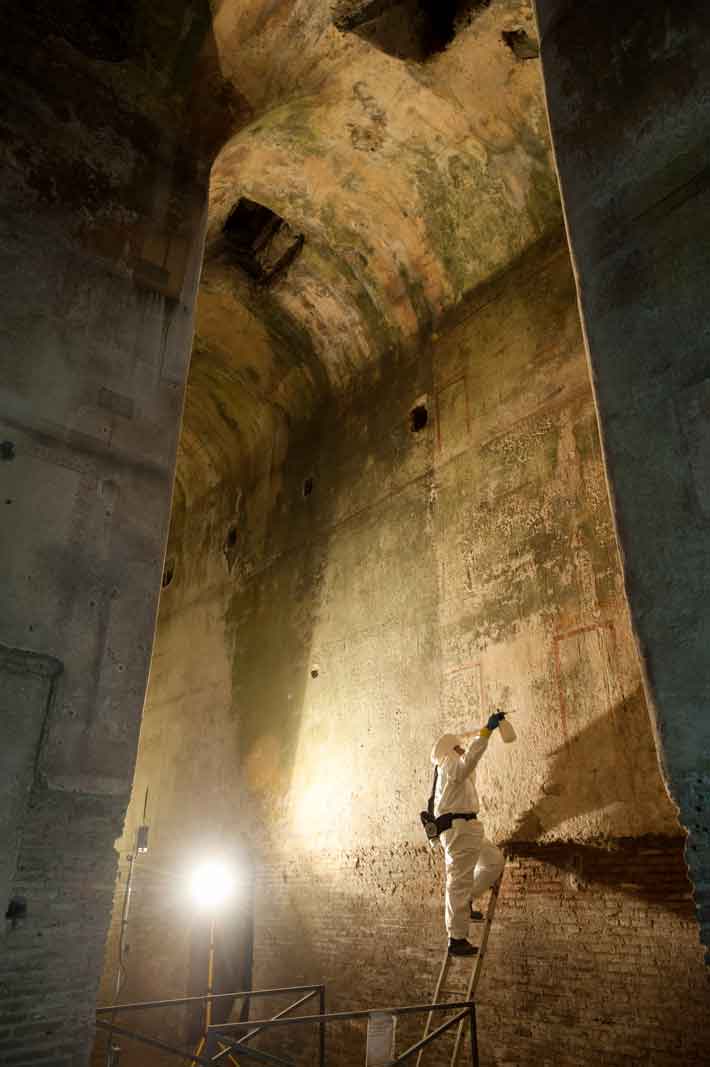 An ambitious restoration and excavation project led by the Archaeological Superintendency of Rome is now under way. The first priority has been to completely rethink and redesign the park, which is in terrible condition. “Until we have lightened the volume of the park—whose weight increases by up to 30 percent when it rains—by more than half, we are far from any effective solution,” says Fedora Filippi, the archaeologist responsible for the Domus Aurea excavations. “We have had to map and then remove existing trees that are causing the most damage, while documenting the entire excavation phase in detail,” she says. “We can’t just dismantle the garden without taking precautions or we will destroy the palace’s frescoed walls, which have managed to adapt and stay standing over the centuries.” According to landscape architect Gabriella Strano, who, along with agronomist Pier Luigi Cambi and biologist Irene Amici, has worked at the mapping project’s pilot site—the first of 22 planned lots—the weight of the earth covering the archaeological remains is conservatively estimated at 5,500–6,600 pounds per square meter, not including the weight of the trees. One laurel tree, which had stood above the Domus Aurea’s ornate frescoes, was removed and found to have weighed more than 30,000 pounds.

Filippi explains that the existing garden will be replaced at a level more than 10 feet above where it is now, with a subsurface infrastructure designed to seal off the underground architecture from moisture and regulate temperature and humidity. The new garden will also have walkways that will recall the past, says Strano. “The ancient writers Columella and Pliny tell us that Roman gardens were made up of straight avenues crossed at right angles by little paths. These new lines will also suggest to visitors the outlines of the structures underneath, and make it possible to channel rainwater.”

One of the benefits of the effort to conserve and stabilize the surviving parts of the Domus Aurea has been the chance to excavate sections that have never been explored, expanding scholars’ knowledge of the palace and its surroundings’ later history. In 2014 a test site was opened in the palace’s western district. “The area surveyed, totaling more than 8,000 square feet, was part of the Domus Aurea’s peristyle. This was filled in to act as a support for the Baths of Trajan,” says archaeologist Elisabetta Segala. “This excavation has allowed us to deepen our understanding of the fate of this space, especially when the baths were abandoned, after A.D. 539, when the Ostrogoths cut off the supply of water from the aqueducts to the city.” It is also known that in the Middle Ages this area became a necropolis for the humble inhabitants of the Oppian Hill. “We have unearthed nine graves that were made using pieces of cocciopesto from the Trajanic baths,” says Segala. “We have also found traces of agricultural activities, mostly vineyards, orchards, and vegetable gardens, that have damaged the skeletons.”

In addition, a team led by Maria Antonietta Tomei, has found new remains of the palace, including the main entertaining and dining spaces, on the nearby Palatine Hill. In 2009 she identified a circular structure that is likely one of the 12-foot-wide supporting pillars of the round dining room described by Suetonius. 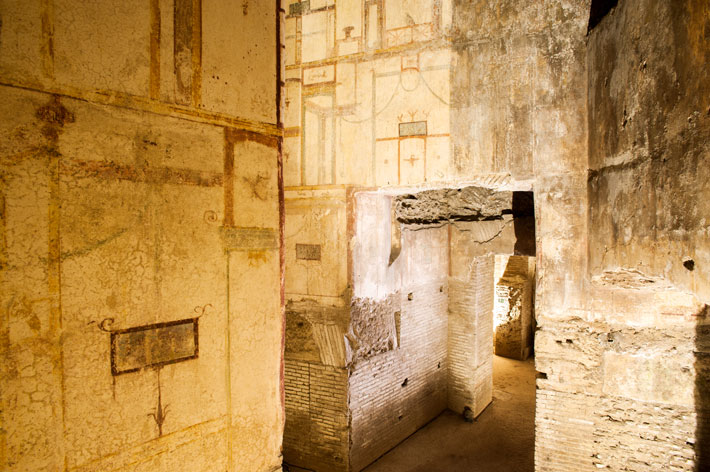 Filippi’s team has further documented the facade of the columned portico that once stretched almost 800 feet and opened onto the artificial lake, according to archaeologist Ida Sciortino of the Italian Ministry of Heritage and Cultural Activities and Tourism. “To restore its original appearance we have to imagine a monument that’s now missing some of its essential components,” says Filippi. “Brickwork that once covered the walls’ cement core is easily reusable and has been removed over the centuries. This has not only thinned the walls, but also deprived them of proper support. Thus, for structural reasons, we are reconstructing the walls with bricks identical to those used in Nero’s time.”

Scholars are currently working not only to explore but also to conserve the Domus Aurea and its ornamentation, removing salts, mineral deposits, fungal growths, and pollutants that are destroying the frescoes that still cover more than 300,000 square feet—the area of 30 Sistine Chapels. They are also trying to reattach the topmost painted layers of the frescoes to the underlying preparatory surfaces from which they have separated. For Mariarosaria Barbera, former archaeological superintendent of Rome, the work on the Domus Aurea, which will likely not be completed until 2018, is crucial. “The Domus Aurea, a country villa in the urban heart of the empire, is an original experiment to integrate the city and nature,” she says. “It represents an attempt to import the refined architecture of Alexandria to Rome, and to give the city the appearance of a lavish eastern capital, which it would take on in the following centuries. We are experimenting with ways to revive Severus and Celer’s intentions, and to recover the lost relationship between the green of the Oppian Hill and the architecture within it. It’s a tremendous challenge.”

Federico Gurgone is a journalist based in Rome. 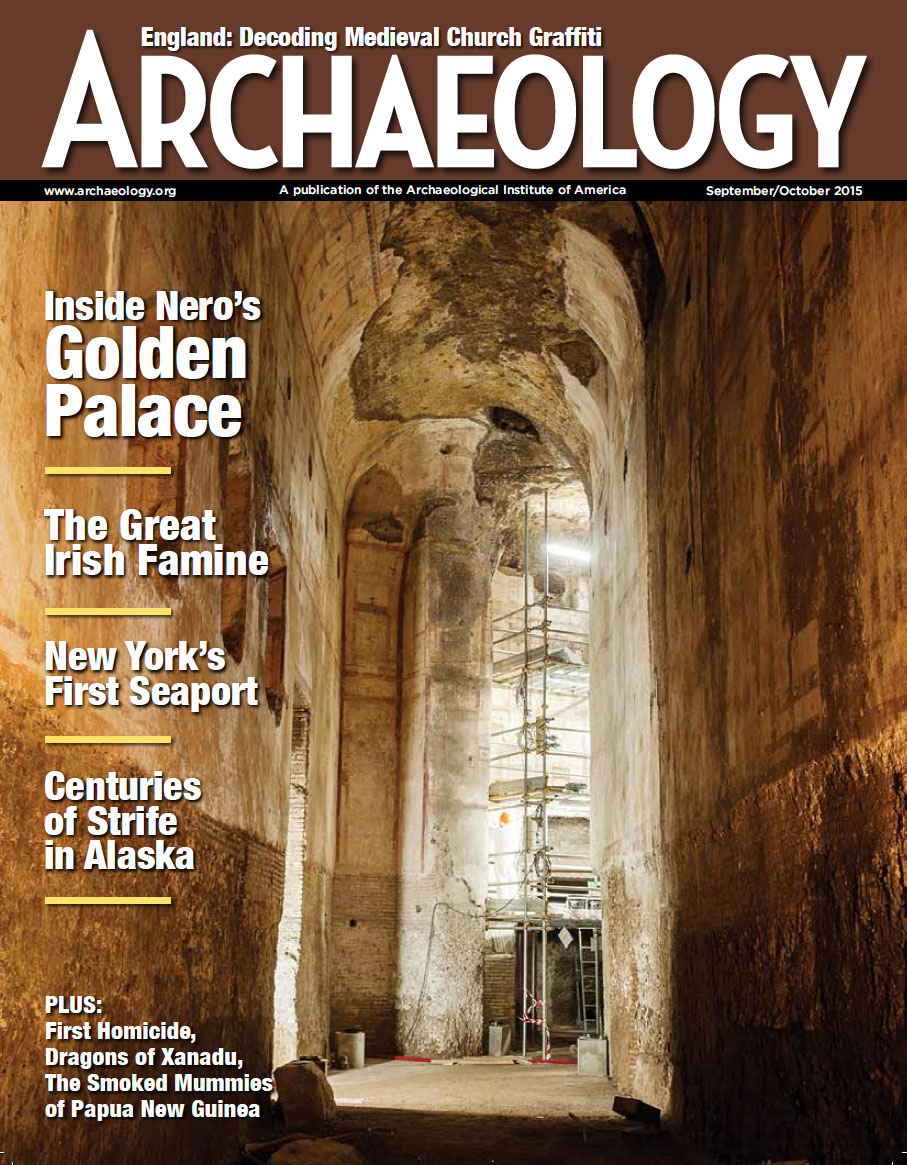 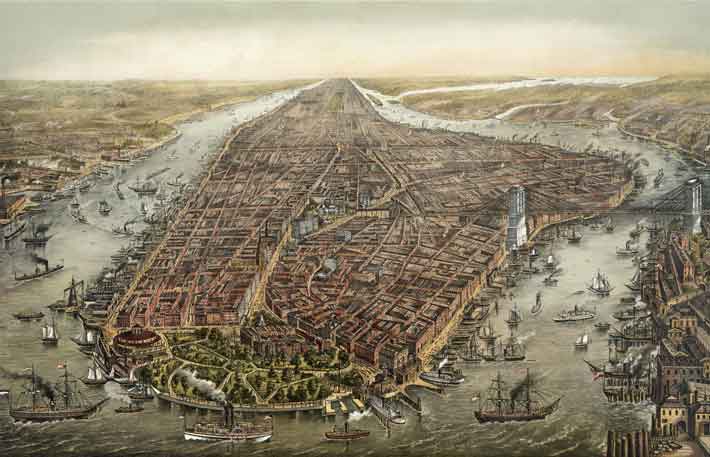