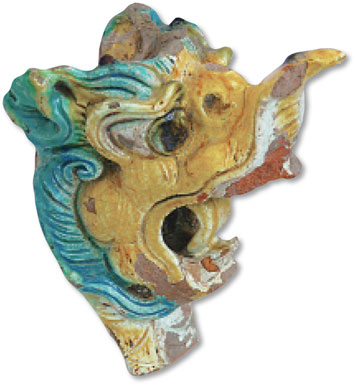 A great empire needs a great capital. In A.D. 1256, the Mongol ruler Kublai Khan, founder of the Yuan Dynasty, instructed his Chinese adviser Liu Bingzhong to design what became his capital city—Xanadu. The legendary site, which covers 12 acres, contains remains of numerous structures, including temples, palaces, city walls, canals, and tombs. The earliest structure known is a type of large, freestanding ceremonial entranceway called a Que-tower. As part of the excavations of Xanadu, Mongolian archaeologists uncovered the tower’s foundations, pieces of brick and stone from the building, and some of its colorful decoration, including this head of a dragon.

The brightly colored beast once covered the end of a supporting beam. Along with two other similar dragons, colored tiles, figurines of an immortal being, a bird, a fish, and architectural elements decorated with dragon and phoenix motifs, the well-sculpted creature begins to give scholars an idea of what Xanadu might have looked like when Marco Polo visited the capital in 1275. The Venetian explorer describes a wondrous natural landscape complemented by stunning buildings, including a marble palace filled with gilded and painted rooms, and another palace made of cane or bamboo tied together with silk and covered in gold. Although it can be hard to imagine how the site would have looked in its heyday—before it was destroyed in 1369 and abandoned some 70 years later—artifacts such as the dragon, which the excavators describe as “lifelike and dynamic,” hint at the splendid impression Xanadu would certainly have made.