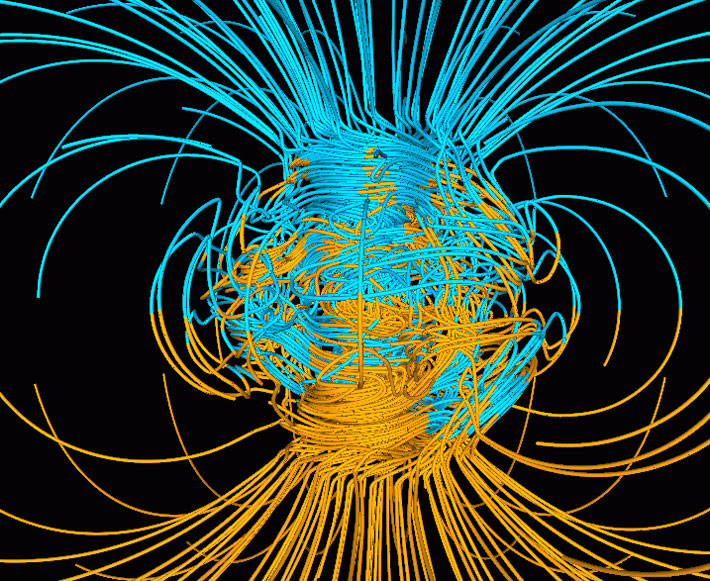 The Earth’s magnetic field helps protect the planet’s surface from the solar wind and cosmic rays. It’s not a static barrier, but rather a complex system generated by iron flowing in the Earth’s outer core. Every few hundred thousand years, the north and south magnetic poles “flip” position, and for the last 160 years, the magnetic field has been weakening. The causes of the reversals and weakening are unknown, but scientists are finding clues in the charred remains of Iron Age houses in southern Africa.

During the Iron Age, people there would, perhaps because of a bad harvest, ritually “cleanse” their villages by burning them down. The fires burned hot enough to melt magnetic materials in the clay. When those materials cooled and solidified, they were remagnetized by the magnetic field, recording its intensity and direction at that moment.

Southern Africa lies within the South Atlantic Anomaly, a particularly weak patch in the magnetic field, larger than the United States. If it grows large enough, according to University of Rochester geophysicist John Tarduno, it could trigger a reversal of the poles. Understanding how the magnetic field, especially in southern Africa, has changed over time might help scientists better comprehend these processes, since there has not been much good historical data on the southern magnetic field. Because of Iron Age superstition, Tarduno and his colleagues now have a record of the anomaly for between 1,600 and 1,000 years ago.

The findings show that during the Iron Age, the magnetic field was as it is today: weakening, with a big southern dent. The field has recovered to a degree since then, but is now weakening again. This suggests that there is some recurring disruption in the flow of the outer core that, like an eddy in a stream, comes and goes. If that eddy grows large enough, Tarduno says, a reversal might be imminent. Such a reversal could take thousands of years to be completed, and while the Earth would have some magnetic protection during this time, satellite communications, the ozone layer, and our power infrastructure would all be at some risk.