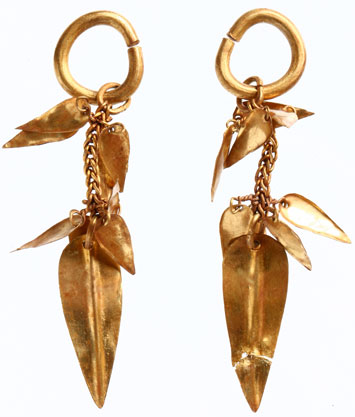 Archaeologists excavating the Geumgwanchong (“Gold Crown”) tomb in Gyeongju in the Korean province of North Gyeongsang have discovered an extremely rare pair of gold earrings dating to the Silla Dynasty (57 B.C. to A.D. 935). “Although Koreans have found hundreds of Silla-era gold earrings in tombs that belonged to noblemen and noblewomen,” according to Dae-hwan Kim of the National Museum of Korea’s archaeology and history department, “the composition, forms, and patterns on these earrings have never been seen.” The Geumgwanchong tomb was constructed between the fifth and early sixth centuries, and is the site where the first Silla gold crown was uncovered when the tomb was originally excavated in 1921.

Archaeologists are also intrigued by the fact that the earrings likely belonged to a male—Silla men often wore thin earrings, while women wore thicker ones—who was a victim of human sacrifice, a common custom in ancient Korea. The identity of the Geumgwanchong tomb’s owner remains one of the most enduring mysteries in Korean archaeology. Researchers have found items, including a sword with engraved letters reading “King Yisaji,” but there is no mention of him in existing Silla records.