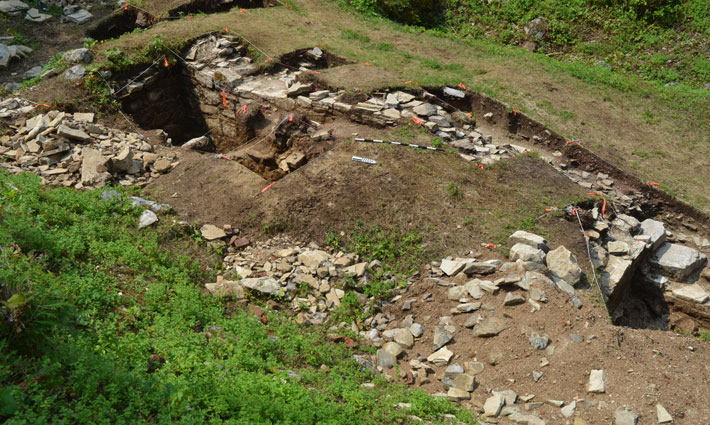 Archaeologists working near upstate New York’s Lake George have uncovered ruins from a partially constructed British fort that was once planned to be their largest in North America. Due to its key location along the waterways connecting New York and Canada, Lake George played a crucial role in the eighteenth-century French and Indian War and, later, the Revolutionary War. The lake and its forts, including Ticonderoga and William Henry, were the sites of pivotal clashes between French and British troops, described famously in James Fenimore Cooper’s The Last of the Mohicans. In 1759, British general Jeffrey Amherst ordered the construction of a massive new fort, Fort George, on a rise overlooking the lake’s southern shore. However, after Amherst’s troops captured the French Fort Carillon (renamed Ticonderoga) later that year, work on Fort George ceased, with only one large corner bastion having been completed. Even so, both British and American soldiers used the site for more than two decades.

The current archaeological investigation, directed by David Starbuck of Plymouth State University and researchers from SUNY Adirondack, is searching beyond the old fort’s known ruins, now part of a public park. “Although the scenic ruins of Fort George are an annual attraction for hundreds of thousands of summer visitors, until recently there was no awareness of what else might have survived,” says Starbuck. The team discovered sections of a stone wall, measuring at least six feet high and five feet thick, along with the remains of underground casement rooms used for the storage of supplies and munitions. Artifacts such as tin-glazed earthenware pottery, buttons, butchered bones, and musket balls are helping to reveal what life was like for the provincial colonial-era soldier. The fort’s masonry also betrays the change in British mentality regarding fortifications in the area. “Most of these frontier forts were ephemeral and built to last only a season or two,” says Starbuck. “Only the ruins of Fort George reveal that a British garrison had built more permanent walls, perhaps hoping that they might better survive the next artillery bombardment from French attackers.”