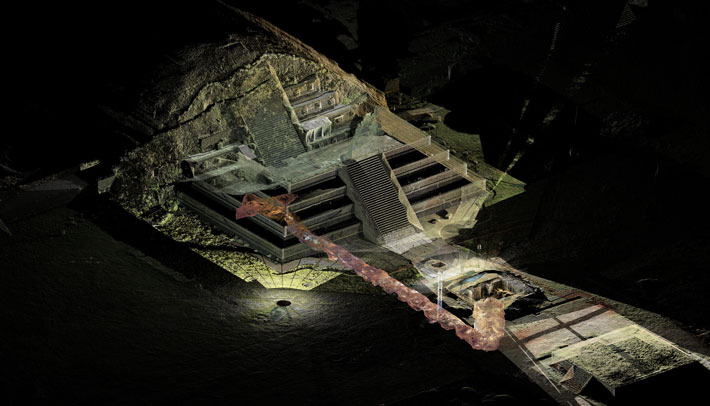 Mercury is often found in Mesoamerican tombs in the form of a powdery red pigment called cinnabar, but its liquid form is extremely rare. So it was with some surprise that Sergio Gomez, an archaeologist with Mexico’s National Institute of Anthropology and History, discovered traces of liquid mercury this year in three chambers under the early-third-century A.D. Feathered Serpent Pyramid in the ancient city of Teotihuacan. Gomez believes the mercury was part of a representation of the geography of the underworld, the mythological realm where the dead reside. The silvery liquid was probably used to depict lakes and rivers.

Since uncovering the entrance to a tunnel leading beneath the pyramid in 2003, Gomez has found five underground chambers containing thousands of artifacts, including many thought to be offerings, such as skeletons of large jaguars and wolves. Other objects, such as figurines made of jade from Guatemala and seashells from the Caribbean, indicate how far Teotihuacan’s influence extended. In addition to helping maintain the mercury in liquid form, the humidity and lack of oxygen in the underground chambers have preserved plant seeds and fragments of something that might be human skin.