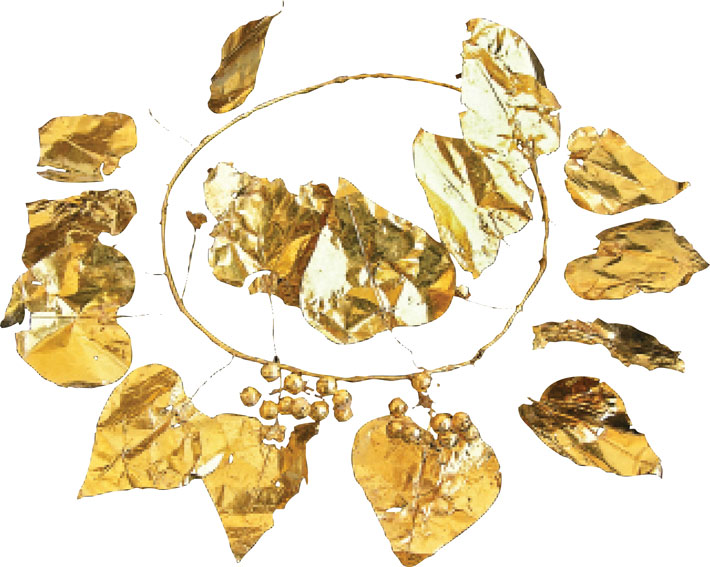 Archaeologists are getting a new look at how the other half lived in Classical-era Cyprus thanks to artifacts unearthed at a 2,400-year-old necropolis on the island’s northern coast. Discovered during construction of a pipeline, the tombs were near the ancient city of Soloi, a leading supplier of copper and timber for the Athenian navy. The remains of three adults and two young girls were found in two unlooted chambers. The grave goods that accompany them suggest that the Athenian trade was prosperous. “This was a rich aristocratic family,” says Ankara University archaeologist Hazar Kaba, who analyzed the artifacts. “Even the children were adorned with elaborate funerary jewelry.”

Many objects discovered in the tombs, including a delicate gold wreath shaped like an ivy plant, and 16 bronze and silver vessels, were from Greece. A figurine depicting Aphrodite and her son Eros was made locally but in the Athenian style, suggesting to Kaba that artisans from Athens may have been living in Soloi. Other artifacts came from Anatolia to the north and the Achaemenid Empire to the east. “While the majority of the goods used by these aristocrats were imported from Greece, it was exciting to see that a large amount of Cypriot and Eastern goods were also present,” says Kaba. “All this evidence points to a way of living that was combining Greek, Cypriot, and Eastern customs and culture together.”