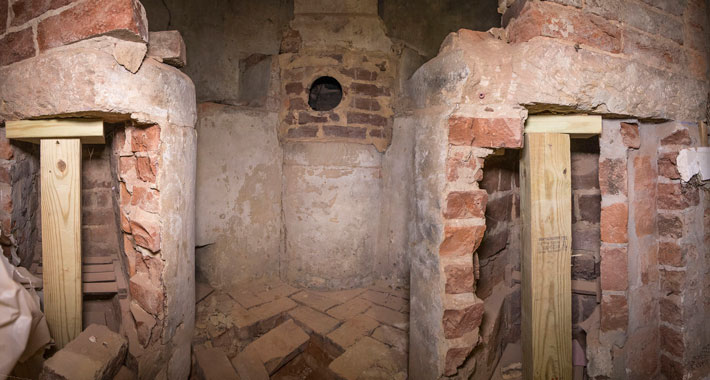 Renovations in the rotunda at the University of Virginia have led to the discovery of a nineteenth-century chemistry laboratory hidden in the building’s walls. The iconic Thomas Jefferson–designed rotunda was constructed in the 1820s as the centerpiece of the university he founded. Recently, while exploring a mysterious void within the walls on the bottom floor, workers found a chemical hearth, which apparently was used by Professor John Emmet during the university’s early years. According to Jefferson’s letters, he and Emmet discussed the location of the chemistry classroom. “For the Professor of Chemistry, such experiments as require the use of furnaces, cannot be exhibited in his ordinary lecturing room,” he wrote. “We therefore prepare the rooms under the oval rooms of the ground floor of the Rotunda for furnaces, stoves, etc.” It was also necessary to locate the chemistry lab on the lower floors so that water for the experiments would not have to be pumped upstairs. The semicircular niche was connected to a sophisticated ventilation system through a series of brick tunnels. The hearth was likely walled up in the 1840s when the chemistry department moved to a different location.