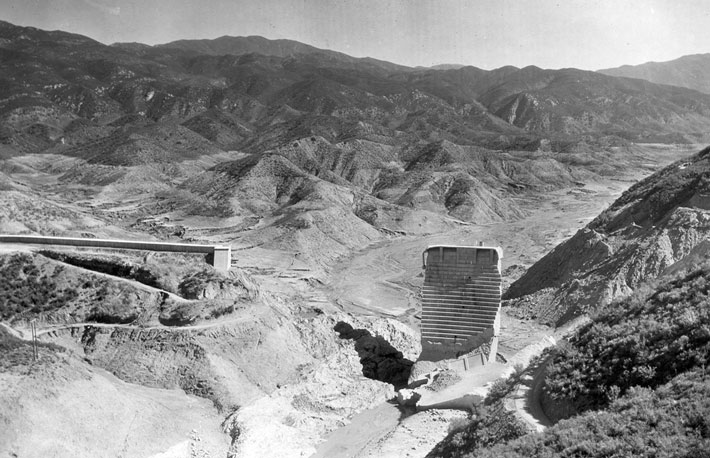 The history of Los Angeles’ water supply is long and complicated—remember Chinatown?—and continues through today’s drought crisis. In the early 1900s, William Mulholland, then superintendent of Los Angeles’ Water Department, oversaw the construction of the Los Angeles Aqueduct to bring water to the city from Owens Valley, more than 200 miles away. About a decade later, he built the St. Francis Dam, in San Francisquito Canyon, to guard the city against drought and to generate hydroelectric power. St. Francis, a curved gravity dam like the later Hoover Dam, was completed in 1926. On March 12, 1928, two years to the day after the reservoir began to fill, the St. Francis Dam failed catastrophically, sending a wall of water through the towns of Piru, Fillmore, and Santa Paula that killed at least 450 people. The disaster, the result of flaws in construction, design, and location, is considered one of America’s greatest civil engineering failures. It ended Mulholland’s storied career and informed the construction of the Hoover Dam, which was completed in 1936. According to David S. Peebles, acting heritage manager for the Angeles National Forest, the recent 100-year anniversary of the Los Angeles Aqueduct sparked new interest in the protected historical site.

When 12.4 billion gallons of water surged through the narrow canyon, it scoured much of the dam site. The only portions left standing were part of the wing wall and a section of the middle of the dam, which was nicknamed “The Tombstone.” The next year that, too, was demolished. Today, the site is accessible to the public year-round, and can be reached from existing county roads. Visitors can see the narrow valley opening, portions of the wing wall and railings, and massive chunks of concrete that still have ridges remaining from the dam’s stair-stepped face. The U.S. Forest Service, Santa Clarita Valley Historical Society, and California State University, Northridge, are all exploring the oral history and documentation of the site, and are making plans to excavate areas associated with dam and aqueduct construction, as well as provide additional interpretive signage for visitors.

Angeles National Forest is crisscrossed by hiking, riding, and biking trails that provide sweeping views of the San Gabriel Mountains, just north of the Los Angeles metropolitan area. The Santa Clarita Valley Historical Society in Newhall gives an annual tour of the St. Francis Dam site, maintains a museum of local history, from the pioneers to the film industry, and gives regular tours of Heritage Junction Historic Park, a collection of relocated and restored historic buildings, including a train station.