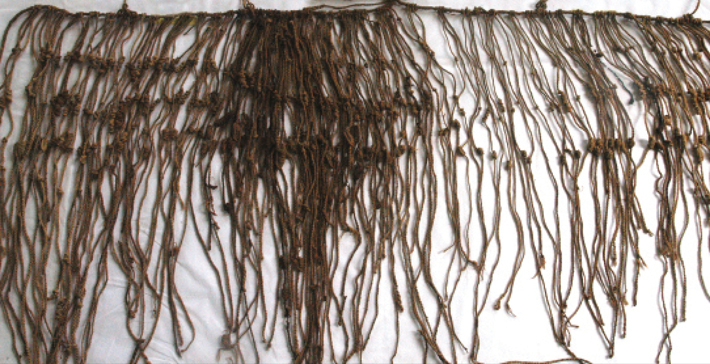 Archaeologists excavating an Inca storehouse at the site of Inkawasi on Peru’s south coast have unearthed 34 khipus, the knotted-string devices once used by the Andean people for keeping records. Some khipus encode purely numerical data, while others contain deeper forms of information, such as records of historical events—but these remain undeciphered. Many of the Inkawasi khipus were found with or covered by the remains of produce, such as peanuts, black beans, and chili peppers, and it’s likely they were used to keep track of those crops when they were brought to storage. Analysis of the khipus shows that some subtract a fixed value from tallies at regular intervals, and could possibly represent a state tax. Harvard archaeologist Gary Urton, who has studied the Inkawaski khipus, is hopeful that understanding the archive may eventually contribute to reading more elaborate examples. “Our income tax forms and our novels use the same alphabet. If we can learn how to read a chili pepper khipu or a peanut khipu,” says Urton, “it might help us in the long run to read the khipus that record historical events.” 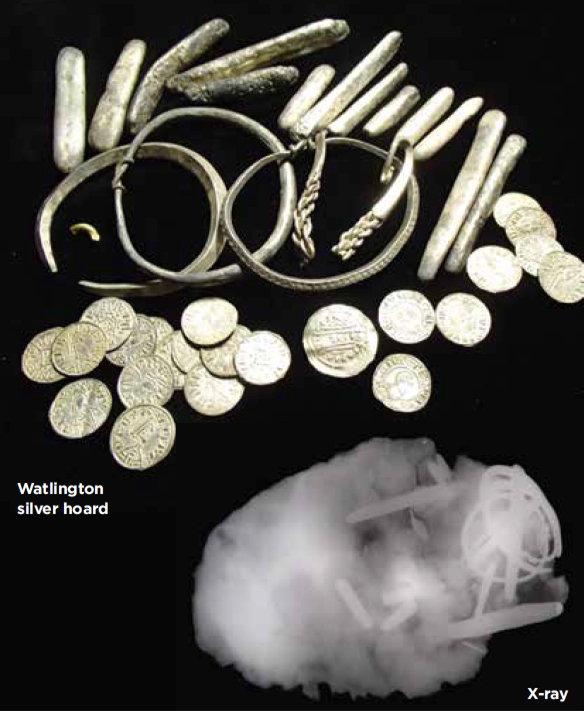 Researchers from the British Museum recently unveiled a Viking hoard of silver that may rewrite early English history. An amateur discovered the treasure in a field in Watlington, Oxfordshire, around 40 miles west of London. The collection of more than 200 items, which includes silver coins, jewelry, and ingots, was intentionally buried in the late 870s A.D., during a tumultuous period when Anglo-Saxon armies fought to repel conquering Viking forces. In 878, King Alfred the Great of Wessex, the last independent Anglo-Saxon kingdom, finally halted the Viking invasion at the Battle of Edington. While English history portrays Alfred as one of the first great English heroes, the Watlington hoard suggests that one of Alfred’s rivals, King Ceolwulf II of Mercia, may also have played a hero’s role. Ceolwulf II is hardly mentioned in English historical accounts—and unflatteringly when he is—yet several of the recently discovered coins prominently depict Alfred and Ceolwulf II together. While a few examples of this minting have previously been found, this new discovery indicates that this coin was more widely produced than previously thought, and attests to a strong political alliance between the two kings. Experts now believe that Ceolwulf II may have played a significant role alongside Alfred in defending England, yet was posthumously “erased” from history by Alfred’s chroniclers. 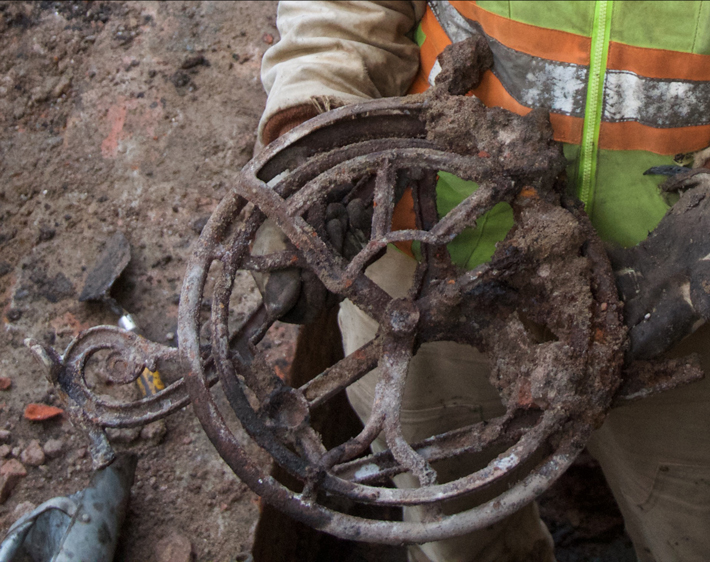 Frenzied development in San Francisco is introducing the city’s real estate and tech booms to its industrial and mercantile history. The $1.6 billion Central Subway project, which will connect Chinatown and the booming South of Market district by light rail, unearthed the latest finds: 10 late nineteenth-century industrial sewing machines, and pieces of several more, from what is thought to have been a basement room in Chinatown. The building, at 1018 Stockton Street, was destroyed in the 1906 earthquake, along with the rest of the city’s original Chinatown, and archaeological remains of the neighborhood are vanishingly rare, according to Adrian Praetzellis, an archaeologist at Sonoma State University. It is hoped that archives can help connect these ornate machines with the names of the men who might have used them. 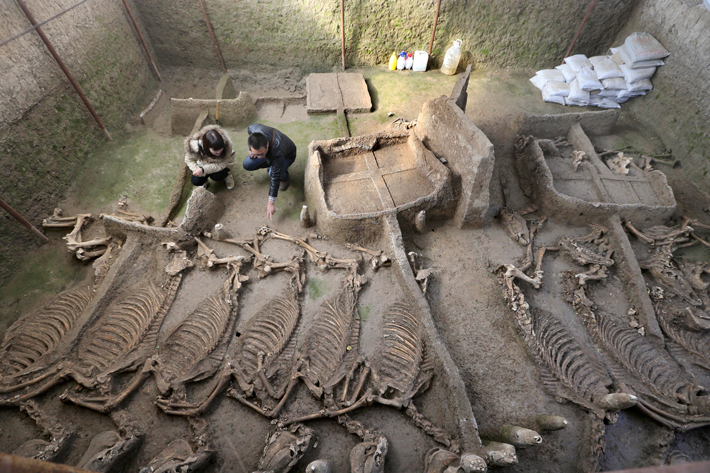 Skulls and bones from cows and rams found in a 2,500-year-old tomb—discovered in a village near Luoyang, a city in China’s Henan Province with particular historical significance as the capital of nearly a dozen dynasties—could indicate that the burial site belonged to the Luhun Rong, an ethnic minority tribe. The tribe, active during the Spring and Autumn Period (771–476 B.C.) of the Eastern Zhou Dynasty, was described in historic texts as barbarians, and was later eliminated during the ensuing Warring States Period (475–221 B.C.). 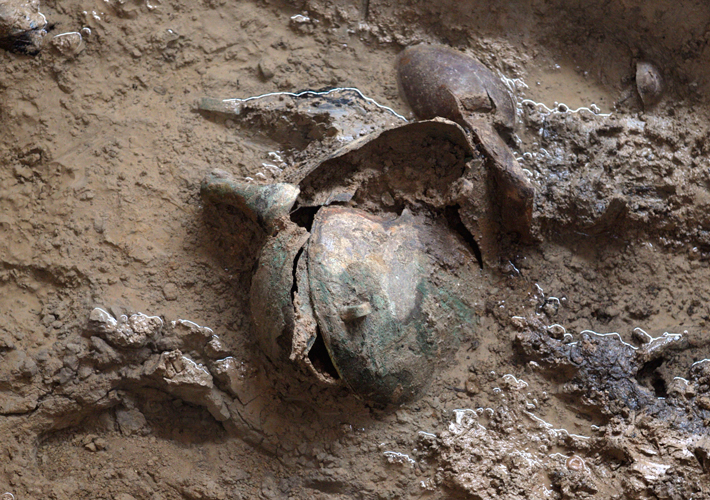 Conclusive evidence linking the tomb to this ethnic minority group would be significant, and some say further evidence could even link it to a completely unrecorded group of people. Chinese history is long and complex, and researchers are always working to fill gaps in certain regions. The artifacts inside the tomb, including a number of chariots, skeletal remains of horses, bronze bells, bronze tripod vessels used to hold food and wine during important rituals, and cowrie shells, may have come from as far away as the Indian Ocean or the South China Sea. The finds are also characteristic of burial traditions of royal or otherwise wealthy families from the Zhou as well as the later part of the Shang Dynasty (1600–1046 B.C.), archaeologists say.

“This is a great find,” Robert Murowchick, a Boston University archaeology professor, says. “But the importance of the tomb does not hinge only on the connection to the Luhun Rong. It is important because it was found in Luoyang, where not many tombs from the Eastern Zhou period have been excavated.” 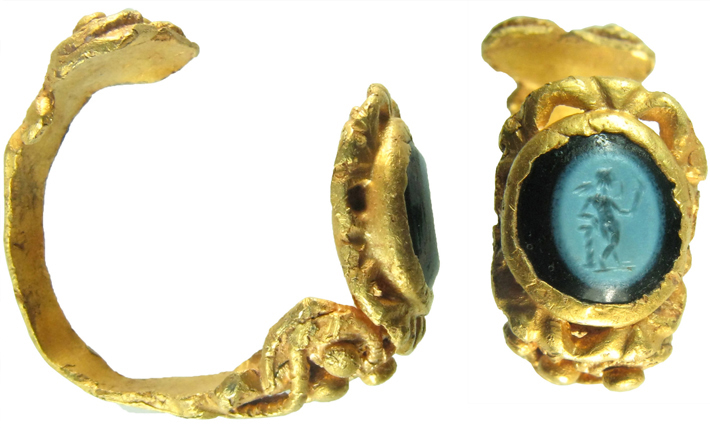 From the iron bands that signified citizenship to those bearing a state seal and worn by the emperor, rings were the most common piece of jewelry for both men and women in the ancient Roman world.

A metal detectorist in Tangley, Hampshire, in southern England, has uncovered a late Roman example dating to the fourth century A.D., fashioned of gold and an unusual type of onyx called nicolo. The ring depicts the god Cupid, his left arm resting on a column and his right arm holding a torch, which he will use to test Psyche (in the guise of a butterfly), in an allegory of love overcoming death. In the absence of the context that comes with a complete archaeological site, it is unknown who might have worn the relatively traditional design.