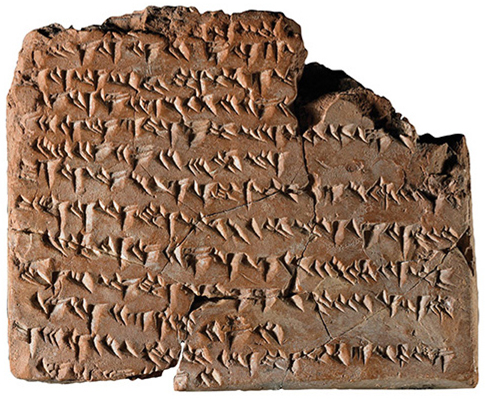 Though Akkadian as a spoken language in Mesopotamia died out toward the end of the first millennium B.C., cuneiform continued to be used by temple scribes and astrologers. Greek scholars are known to have flocked to Babylon during this time to learn astronomy, and excavated tablets inscribed in both Greek and Akkadian show that at least a few of these visiting astronomers even tried to master the art of writing cuneiform. But the end was near. The last known tablets that can be dated were written in the late first century A.D. Some scholars believe cuneiform ceased to be used around that time, but Assyriologist Markham Geller of the Free University of Berlin believes it endured for another two centuries. He points to classical sources that mention that Babylonian temples continued to thrive, and believes that they would have maintained scribes still capable of reading and writing cuneiform to ensure that rituals were properly performed. He also thinks cuneiform medical texts may have continued to be used to diagnose illnesses during this era.

But in the third century A.D., the neighboring Sassanian Empire, known to be hostile to foreign religions, seized Babylon. “They shut the temples down,” says Geller, “and they sent everyone home.” He believes it was only when the very last of these temple scribes died that the rich, 3,000-year-old cuneiform record finally fell silent.