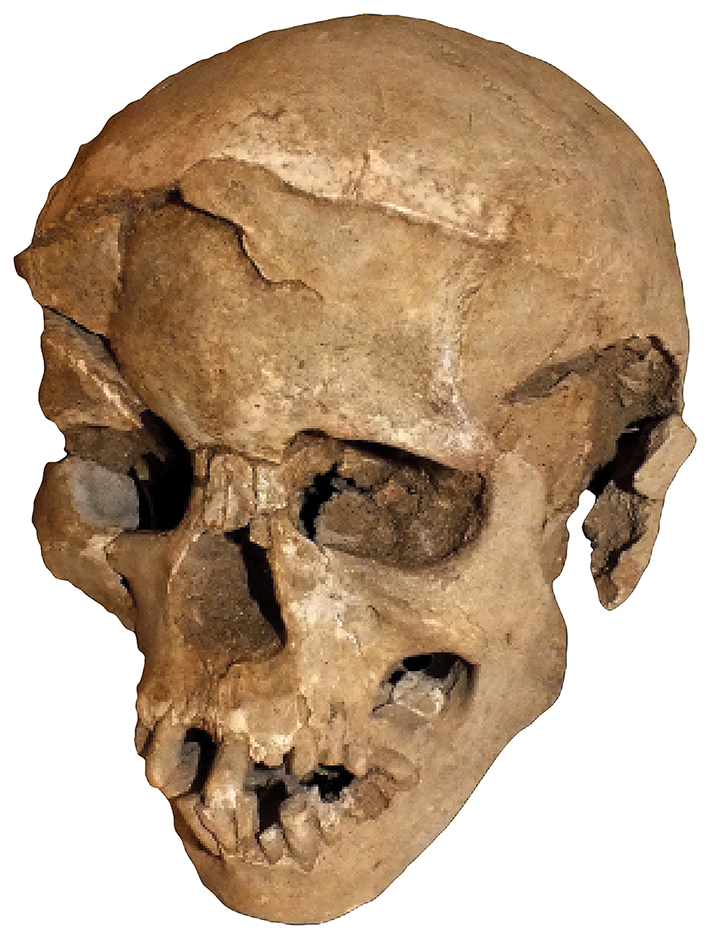 The massacre took place roughly 10,000 years ago, but the victims’ bones weren’t buried; they lay on the ground at the site of Nataruk near the shore of Kenya’s Lake Turkana. Millennia later, they were discovered entirely by accident. Marta Mirazon-Lahr of the University of Cambridge had planned to explore a sediment layer dating to the time when the first Homo sapiens lived in the area, but her team first found 12 skeletons emerging from the ground due to erosion. Ten of the skeletons show signs of violent deaths: heads had been smashed with clubs, an obsidian arrow tip was embedded in the top of one skull, and another person’s face has a deep cut that may have come from a club inset with obsidian blades. Mirazon-Lahr believes the attack was not the result of a chance encounter between bands of hunters because the wounds were caused by fragile weapons that would have had little use in hunting.

Archaeological evidence of prehistoric warfare is hard to find, and mostly comes from much later villages or settlements. This had previously led researchers to believe that sedentism was a prerequisite for organized conflict. What is interesting about the incident at Nataruk is that it appears to have occurred between groups of hunter-gatherers, and the discovery is upending assumptions about what provokes violence between groups of people. According to Mirazon-Lahr, the area around Lake Turkana was an excellent hunting ground 10,000 years ago—a paradise, in effect. The attackers were probably not starving and probably did not go to war as a last resort. Lake Turkana is surrounded by mountains, which might have allowed one group of people to control access to the area near Nataruk. The critical issue was not sedentism, thinks Mirazon-Lahr, but differences in wealth. “In the world of hunter-gatherers,” she says, “wealth is probably defined as access to the best hunting grounds.” 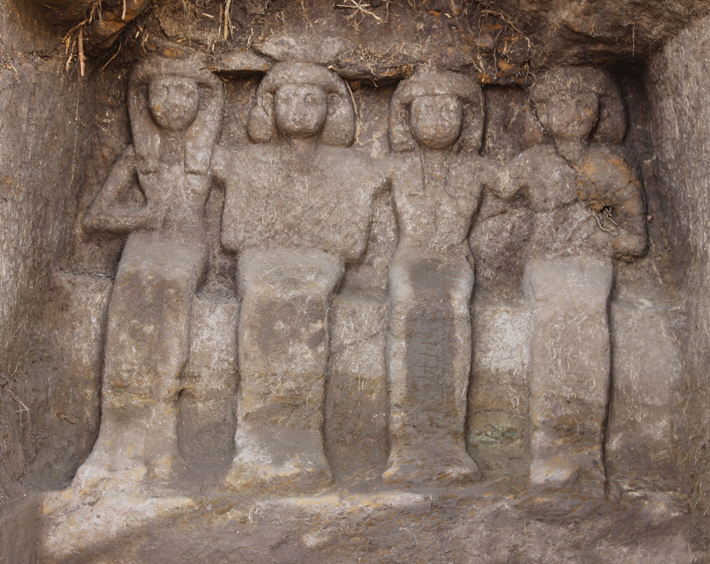 Two shrines at Gebel el-Silsila on the banks of the Nile River in southern Egypt—thought to have been completely destroyed by an earthquake and erosion—have been discovered largely intact. The shrines, located by a team from Lund University in Sweden led by Maria Nilsson, served as memorials to elite families. One includes statues of a man, his wife, and a son and daughter. Hieroglyphics identify the man as Neferkhewe, the “overseer of foreign lands” under pharaoh Thutmose III (r. 1479–1425 B.C.), and his wife as Ruiuresti. “The mother’s name is foreign and the part that we have of the daughter’s name is also foreign,” says John Ward, the project’s associate director. “So it looks as if we have a Nubian family who have taken on the Egyptian religion and produced this shrine in order to gain immortality.” 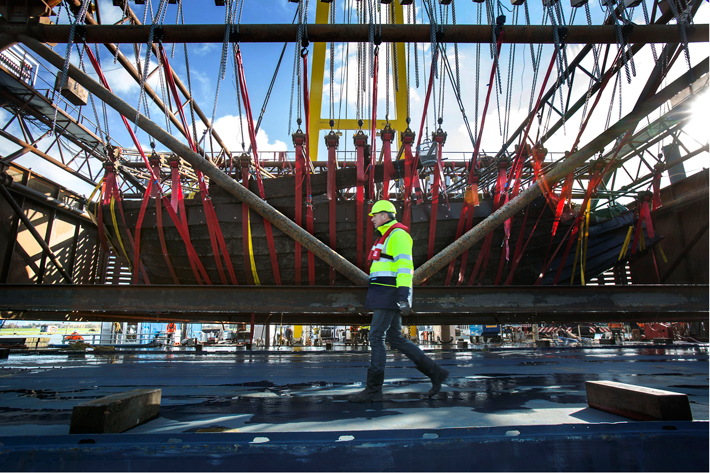 After years of careful planning, archaeologists have raised a well-preserved late medieval ship from the bottom of the IJssel River in the Netherlands. The ship was discovered in a 2012 survey associated with a river-widening project. Archaeologists believe that the ship, an oceangoing trading vessel known as a cog, was intentionally sunk around 600 years ago to help increase water flow on the river. “Today, river works are planned to control the river’s flow,” says Wouter Waldus, the project’s lead maritime archaeologist, “but in the fifteenth century, the problem was too little water flowing.”

The 66-foot-long cog rested perpendicular to the river’s flow, along with a barge and a riverboat. Waldus believes engineers of the time would have sunk the boats to block one arm of the river, increasing flow to its other arms. Today, the river’s swift current and heavy boat traffic made raising the boat complicated. The team built a wall to dull the current, used screws to reinforce the ship’s fastening, and constructed an iron cage to protect the ship as it was lifted.

On the evening of January 3, 1826, someone entered the Northumberland home of Joseph Hedley—known locally as “Joe the Quilter” for his great skill with needle and thread—and brutally murdered the lonely old man. Joe’s murder was a sensation that drew even the attention of King George IV, who issued a reward for information leading to the culprit. The reward was never claimed and the crime went unsolved, but Joe was never forgotten. More than 60 years later, a newspaper article was published about his murder, and when archaeologist John Castling of the Living Museum of the North in Beamish began speaking with locals last year, he was surprised to find that people remember the story. 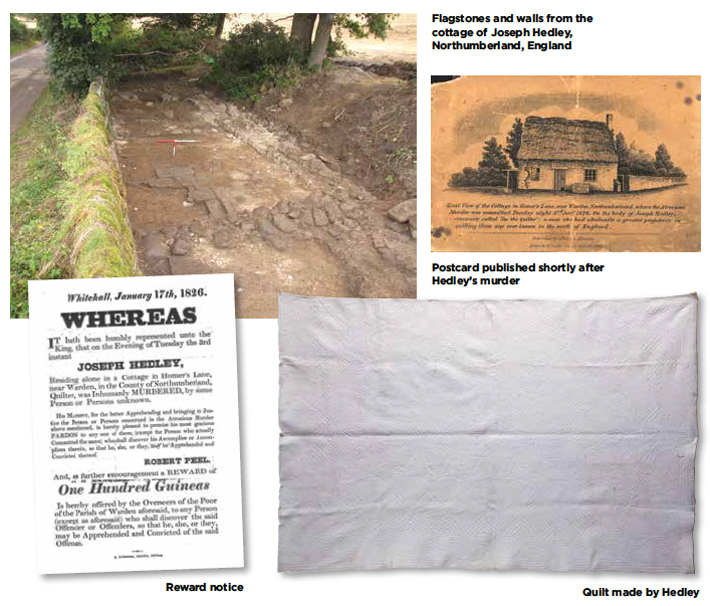 Inspired by an 1826 postcard and using old maps of the area, Castling and his team began to look for Joe’s cottage. On a piece of unfarmed land, they identified pottery dating to Joe’s time and mortar associated with a building. Castling excavated the site for four weeks and uncovered 10 tons of material: stones from walls, flagstones, fireplace bricks, buttons, and pins made of bone—and lead weights possibly associated with quilting. “We were lucky because the house is so isolated, no other buildings were ever built there, and it wasn’t destroyed until 1872,” he says. Plans are now under way to reconstruct Joe’s cottage. “It’s so rare to find anything related to an individual, and especially so because Joe and those who knew him weren’t wealthy or particularly famous,” says Castling. “It’s a real insight into the life and home of a genuinely ordinary man only made famous by his extraordinary death.” 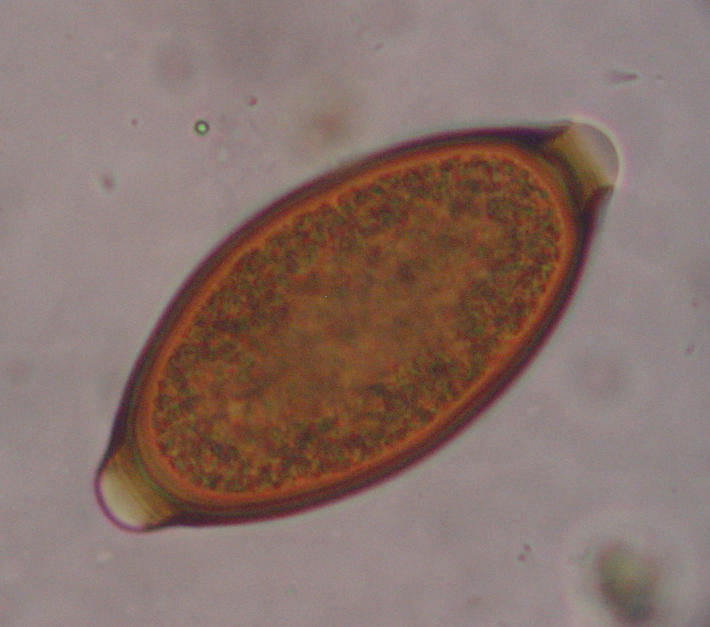 The woeful state of Viking bathrooms could be a factor behind smokers’ coughs in Scandinavia. Sometimes in human evolution, populations adapt in ways that aren’t always beneficial in the long run. For example, the sickle-cell trait evolved in humans because it provides some protection against malaria, but people who inherit the trait from both parents develop sickle-cell disease, a serious blood disorder. In this new case, molecular biologists have connected intestinal parasites in the Viking Age to modern lung disease.

Last year, Danish scientists studying the remains of a Viking privy found that the ancient Norse and their domestic animals were infested with a variety of intestinal parasites. These parasites release enzymes called proteases that cause disease. The immune system also creates proteases that can cause inflammation and damage, but the body has natural defenses against those, including a molecule called alpha-1-antitrypsin (A1AT). Because they were more or less constantly infected, Vikings evolved to produce “deviant” forms of A1AT that were specifically useful against worm-related proteases instead of the body’s own. In the absence of normal A1AT, the immune system’s own proteases are free to damage tissue, including in the lungs and liver. At the time, the benefits of this genetic mutation outweighed the risks. Not so today.

Today, this deficiency of normal A1AT is the only known genetic risk factor for lung diseases such as chronic obstructive pulmonary disease (COPD) and emphysema. People also live longer and smoke tobacco, which allows the damage caused by the deficiency to accumulate. “It is only in the last century that modern medicine has allowed human populations to be treated for disease-causing worms,” says Richard J. Pleass of the Liverpool School of Tropical Medicine. “Consequently, these deviant forms of A1AT that once protected people from parasites are now at liberty to cause emphysema and COPD.”