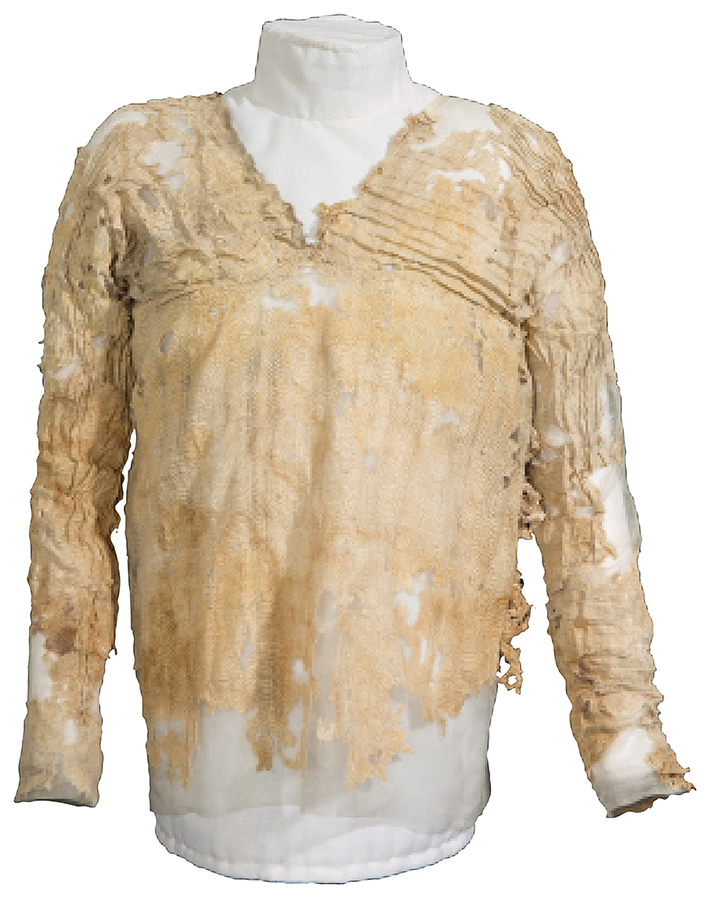 Over the two-plus years Alice Stevenson has been curator of the Petrie Museum of Egyptian Archaeology in London, she has looked at the delicate cream-colored garment hundreds of times, wondering at both the fineness of its workmanship and its extraordinary age. Thought to date from nearly 5,000 years ago, the “Tarkhan Dress” was once part of a large pile of dirty linen cloth excavated by Sir Flinders Petrie in 1913 at the site he named Tarkhan after a nearby village 30 miles from Cairo. In 1977, researchers from the Victoria and Albert Museum, while sorting through the pile of textiles as they prepared to clean them, discovered the dress, remarkably well preserved. They conserved the fabric, sewed it onto a type of extra-fine, transparent silk called Crepeline to stabilize it, and mounted it for display. The dress came to be known not only as Egypt’s oldest garment, but also as the oldest woven garment in existence. Yet in the absence of a precise original archaeological context—the mudbrick tomb in which the linen had been found had been plundered in antiquity—the exact age of the dress remained a subject of contention.

In 2015, as part of the reinstallation of the museum’s collection on its 100th anniversary, Stevenson asked Michael Dee of the University of Oxford’s Radiocarbon Accelerator Unit to help her put the question to rest. Linen associated with the garment, but not the dress itself, had been dated in the 1980s to the late third millennium B.C. since the sample size required at the time might have damaged the garment. In addition, the precision of the accelerators used for radiocarbon dating is far greater today. Using sterilized tweezers and scissors, Stevenson took a tiny thread from the dress, a process she describes as nerve-racking. “You can’t help but envision the whole thing suddenly unraveling before you,” she says. In the case of linen, the smallest sample that can be tested corresponds to a piece of string about half a centimeter long, weighing between two and three milligrams. (The sample from the Tarkhan Dress weighed just 2.24 milligrams.) “You’re never pleased about removing a piece from an artifact, however small,” says Dee. “But it’s also exciting because you’re presented with the opportunity of confirming the item’s antiquity, and in many ways enhancing its cultural value.” For example, another ancient Egyptian artifact Dee tested is the Ramesses III Girdle, a woven linen waistband thought to date to the twelfth century B.C. Dee’s results corroborated that date, silencing rumors that the artifact might be a fake.

Fortunately, linen is particularly easy to analyze. “Linen is a robust plant fiber composed of the carbon-rich biopolymer cellulose,” Dee explains. “This is much easier to handle and date than proteinaceous fibers like those found in wool and leather.” Flax, from which linen is woven, also has a short growing time, making precise dating results easier to obtain. The major obstacle the team confronted was the size of the sample. “It was just so small,” Dee says, “so I am actually pleased, and somewhat surprised, we were able to produce a date.”

Perhaps even more surprising was the date itself—the Tarkhan Dress is from between 3482 and 3102 B.C., not only making it the oldest woven garment in the world, but also pushing the date of the linen back, perhaps to before Egypt’s 1st Dynasty (ca. 3111–2906 B.C.). “We’d always suspected it was old, and even if it wasn’t near the 1st Dynasty, even a 5th Dynasty dress [ca. 2500 B.C.] is still pretty old by archaeological standards for this type of object,” says Stevenson. “But this new dating has affirmed my appreciation of the garment. With its pleated sleeves and bodice, together with the V-neck detail, it’s a very fine piece of clothing. There’s nothing quite like it anywhere of that quality and of that date. It’s amazing to think it has survived some 5,000 years.”