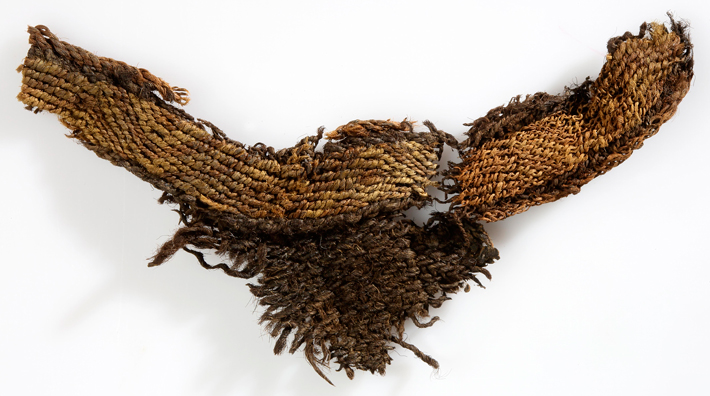 The remains of the “Woman in Blue,” discovered in 1938 in eastern Iceland, have been subjected to a battery of tests that have revealed new details about her origins and life history. Chief among these is that the woman, named after a blue-dyed apron she was buried in, appears to have come to Iceland during its early settlement period. Radiocarbon dating of one of her teeth suggests that she was born around A.D. 900, while settlement is thought to have begun around A.D. 871. Isotopic analyses of the same tooth indicate that, at around age five, her diet shifted from one composed primarily of land animals to one including a mix of seafood and land animals. “This implies that she moved to Iceland some time after the age of five,” says Joe Walser of the National Museum of Iceland. The analyses suggest that she spent the early part of her life in southern Denmark or the British Isles.

Fragments of the woman’s apron and another garment show an amalgam of Nordic and Celtic weaving and spinning techniques using wool that appears to have been sourced locally. She was also buried with grave goods including Scandinavian-style copper-alloy brooches, an imported soapstone spindle whorl, and an iron tool with a bone handle.