Archaeologists from Historic England and the Salisbury Museum were called to investigate a well-preserved Roman mosaic discovered near Tisbury in Wiltshire, England. The red, white, and blue ancient floor was found just 18 inches belowground when a local resident was installing an electrical cable in his garden. After a week of geophysical survey and excavation, experts concluded that the mosaic was part of a large Roman villa complex that was built between A.D. 175 and 220. Due to its size and state of preservation, the villa’s discovery is being characterized as “unprecedented in recent years.” 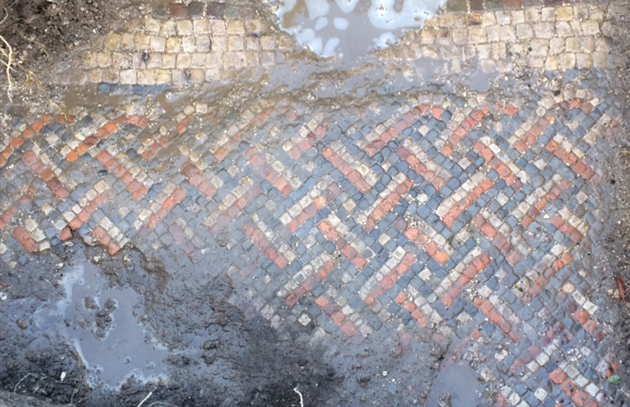 The walls of the ground floor, which contained as many as 25 rooms, were preserved to a height of five feet. The double-courtyard villa is believed to have stood three stories high, and may have rivaled the most opulent Roman villas in England. In the brief investigation, archaeologists uncovered evidence of the ancient family’s wealth, including coins, jewelry, and even discarded oyster shells—the shellfish would have been transported from the coast 45 miles away in buckets of salt water.

Occupation of the site lasted until the seventh century, and researchers are hoping that further investigation can reveal more about the comparatively little-known historical period between the collapse of Roman Britain and the beginning of the Anglo-Saxon era.