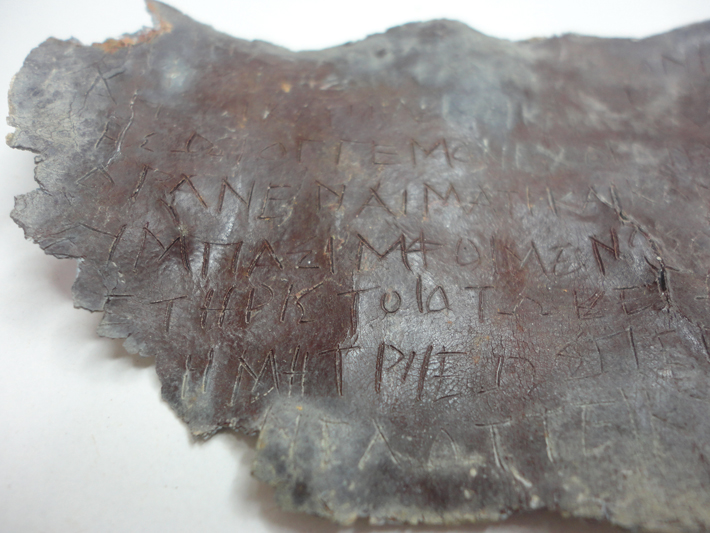 In a fourth-century B.C. cemetery near Athens, a team led by archaeologist Maria Petritaki recently discovered a cache of five lead tablets pierced with iron nails in a grave holding a woman’s cremated remains. Four of the tablets were inscribed with text that Yale classicist Jessica Lamont recently translated. She found they contain nearly identical ritual curses that beseech the gods Hecate, Artemis, and Hermes to punish several sets of husband-and-wife business owners, probably tavern keepers. According to Lamont, it is difficult to know exactly why the person who commissioned the tablets targeted the couples, but they were likely involved in some kind of commercial rivalry. “It is possible that this cache was commissioned in connection with a court case,” she says. Lamont also notes that the style of the curse texts, which were well-written in clean, beautiful script, complete with a phrase from Homer, suggests that some sort of professional scribe or “magician,” well versed in the supernatural, was paid a considerable amount to write them. “This was an elaborate, if not desperate, ritual undertaking,” says Lamont. The tablets were likely interred with the woman’s remains because graves were seen as conduits to the gods.