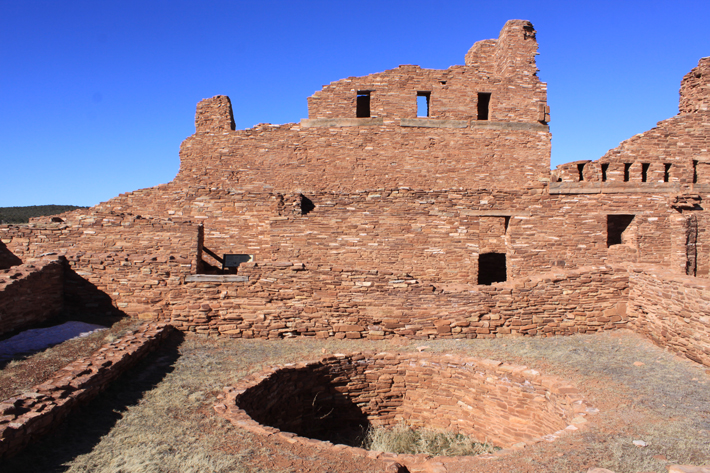 In 1620, Spanish Franciscan missionaries arrived in what is now known as the Salinas area of New Mexico, southeast of Albuquerque, then a Native American community and trading hub populated by the Tompiro and Tiwa Pueblo Indians. It is easy to see why the site appealed to the Spanish—both missionaries and traders—as the trade conducted there provided access to the Plains peoples, such as Apaches, and valuable bison hides. Spanish dreams of wealth in Salinas never materialized, and in the face of tribal conflict, drought, and famine, the pueblo and missions were abandoned in the 1670s. The spectacular ruins that remain today are an interesting combination of traditional Native American pueblos and Spanish mission architecture. According to Jake Ivey, a historian of Spanish architecture and former National Park Service archaeologist, they remain little visited, despite being designated a National Monument in 1909. The site has been expanded several times since. 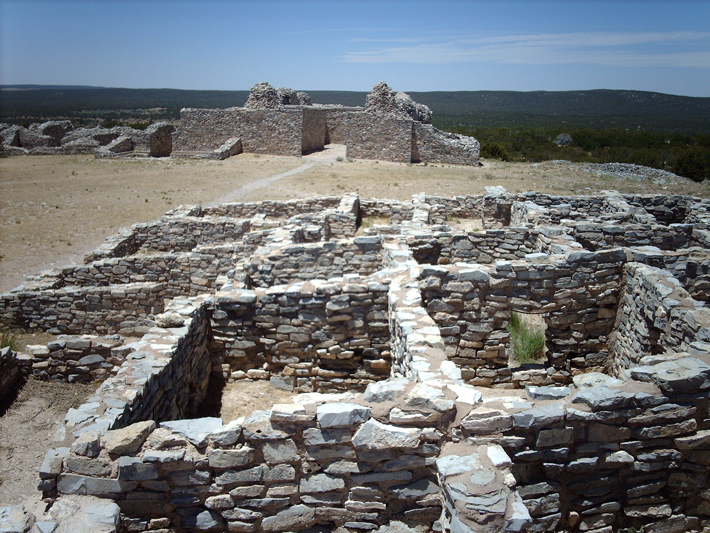 The Salinas Pueblo Missions National Monument consists of the ruins of three pueblos and two missions, divided among three locations—Quarai, Abó, and Gran Quivira—separated by miles of grassland. The northernmost site, Quarai, consists of a sizable red-orange sandstone church that stands about 40 feet tall. Pueblo mounds suggest that there was a significant Native American population there prior to Spanish contact. The mission also contains an unusual square kiva, or subterranean ritual room, which might have been built by the missionaries to aid in conversion. A similar, though more traditionally round, kiva is also found in the church at Abó, 12 miles to the south. The largest and most remote of the three sites is Gran Quivira, originally known as Las Humanas, which includes the remains of seven kivas, a 200-room pueblo, and two missions: an early one used for years, and the larger but unfinished Mission San Buenaventura, with walls up to 30 feet high. Unlike the warm sandstone of the other sites, Gran Quivira is built from large, angular, gray limestone chunks. All three sites are served by a centrally located visitor center in the town of Mountainair.

The ruins are accessible as a day trip from either Albuquerque’s chile-inflected New Mexican cuisine or Santa Fe’s wealth of galleries and shops. Outside Albuquerque is Petroglyph National Monument, home to an estimated 24,000 images carved into dark volcanic rock. And nature lovers should visit the Sevilleta National Wildlife Refuge, which includes steppe, prairie, desert, and woodland environments, with the Rio Grande flowing right through the middle.