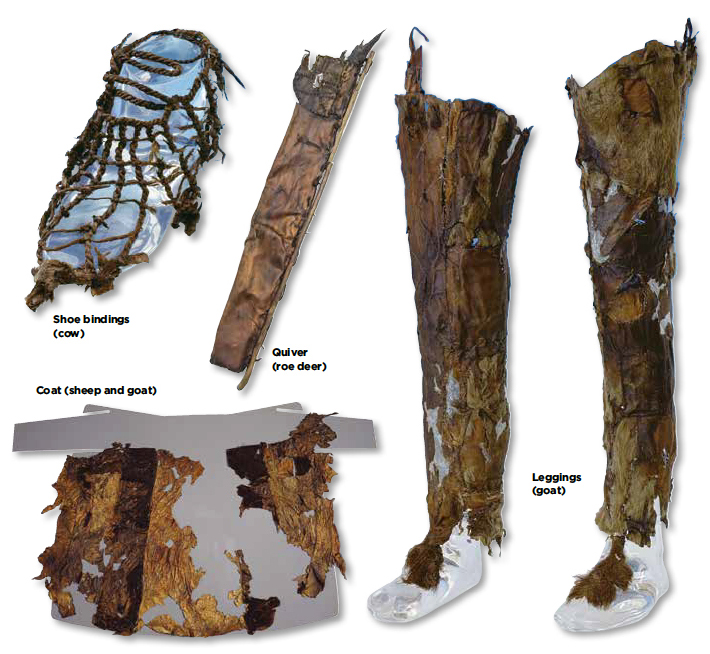 A new study has concluded that the wardrobe of the 5,300-year-old ice mummy known as Ötzi was assembled from five different animal species. Until recently, identifying the provenance of Ötzi’s surviving garments was difficult due to the degraded nature of the material. However, thanks to advances in genetic sequencing technology, a research team enriched and increased the existing DNA information so that the exact species of furs and leathers could be identified for six items: his coat, loincloth, leggings, shoe bindings, hat, and quiver. The analysis indicates that the coat (sheep and goat), loincloth (sheep), leggings (goat), and shoe bindings (cow) were made from domesticated animals, which were readily available through husbandry or trade. The fur hat (brown bear) and quiver (roe deer) were fabricated from the skins of wild species, and may have been acquired through hunting or scavenging. According to Niall O’Sullivan, researcher at the Institute for Mummies and the Iceman, Copper Age people such as Ötzi made deliberate decisions concerning a particular garment’s composition. “We can infer that ancient populations made considered choices when choosing raw material for manufacture,” he says, “[For example], the goat skin may have had a special characteristic such as flexibility that made it optimal for leggings.”