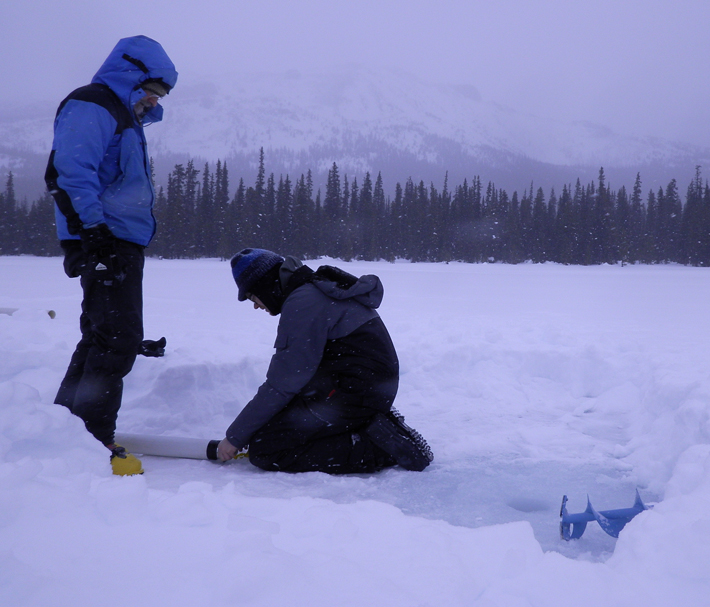 The first people to migrate into the Americas, likely more than 16,000 years ago, probably traveled down the western coast rather than along an inland route, according to an environmental study of two lakes in British Columbia, Canada. The inland path from the Bering Strait to the continental United States and South America would have been a 900-mile-long, ice-free corridor between the Cordilleran ice sheet that covered the coastal mountain ranges to the west and the Laurentide ice sheet that covered the plains to the east. The lakes in the study are located in what was once a “bottleneck” between glaciers. A multinational team of scientists examined pollen and DNA samples from sediment cores taken near the lakes, and used a technique called metagenomics to get a highly detailed picture of how the ice-free corridor ecosystem developed over time. Rather than looking for DNA from a single species, metagenomics involves sequencing every bit of DNA in a sample to better understand entire ecosystems. “The level of diversity we can uncover with DNA technology is more extensive than people have recovered in the fossil record,” says Eske Willerslev of the Center for GeoGenetics at the University of Copenhagen.

The researchers found that the corridor would not have been open before 14,700 years ago, and did not develop a stable ecosystem capable of supporting even small game until about 12,600 years ago. The metagenomic analysis revealed—among other things—traces of mammoth, bison, eagle, salmon, and beaver DNA from the ecosystem once it had matured. But this was thousands of years after the first Americans arrived, and means that they must have taken a different path. Next, Willerslev and the team hope to sample sites along the west coast of Canada and the United States to confirm their suspicions that this was the only viable route of entry.