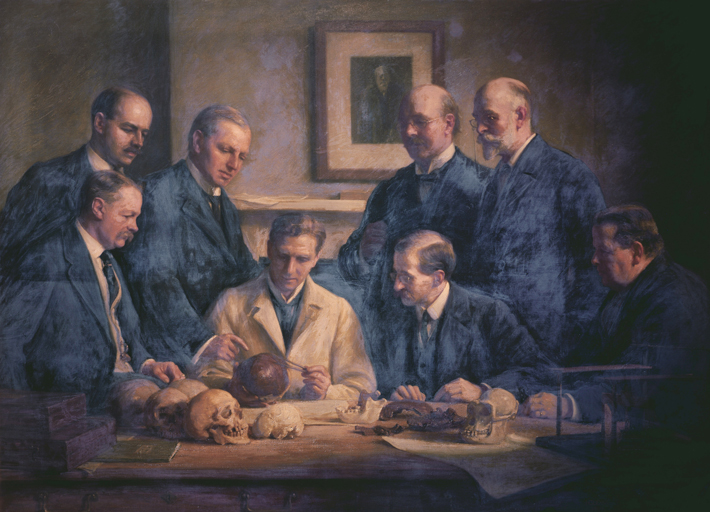 You see before you, ladies and gentlemen of the jury, the coldest of cases, an archaeological fraud perpetrated more than 100 years ago, concerning the evolution of humankind, the scientific process, and personal ambition. It centers on Piltdown Man, paleoanthropology’s greatest whodunit.

In February 1912, amateur fossil collector Charles Dawson wrote to Arthur Smith Woodward, distinguished Keeper of Geology at the British Museum of Natural History (now just the Natural History Museum), to tell him of a new find, “a thick portion of a human(?) skull.” The previous decades had seen the identification of Homo erectus and Homo heidelbergensis, and scientists and antiquarians were on the hunt for more—specifically human ancestors with apelike features and bigger, humanlike brains. Two years of excavation at the site of Dawson’s find, Piltdown, Sussex, yielded a simian jawbone with two molars, a canine tooth, parts of a humanlike skull, stone tools, and mammal fossils. Surely the find, named Eanthropus dawsonii (“Dawson’s dawn man”), would be Dawson’s long-coveted ticket into the Royal Society. “People wanted to believe it,” says Chris Stringer of the Natural History Museum, who recalls seeing the Piltdown finds on display as a child in the 1950s. “Britain was ready for Piltdown Man.” Dawson died in 1916, but not before he wrote to Woodward of another find, at a site known as Piltdown II, of a tooth and more animal fossils, which Dawson’s wife turned over to the museum. 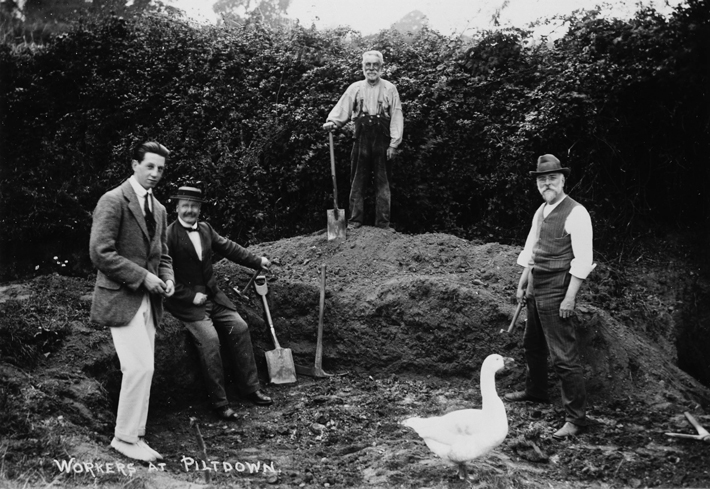 Doubts dogged Piltdown Man, primarily because the bones didn’t appear to fit with later finds in Africa and Asia. In 1953, Kenneth Oakley, a scientist at the museum, confirmed suspicions and exposed Piltdown Man as a fraud. The jawbone was probably from an orangutan and the skull from a modern human, he found, and they had been manipulated and stained. There have been a number of suspects over the years, in varying conspiratorial combinations. Suspicion usually falls on four: Dawson, Woodward, Teilhard de Chardin (a Jesuit priest who uncovered the canine tooth), and Martin Hinton (a museum volunteer later found to have, among his effects, stained and modified bones). Now the testimony of a multidisciplinary group of scientists who revisited the Piltdown finds with the latest in spectroscopic, radiographic, and genetic technology has placed the spotlight on a single culprit. Their work shows that the Piltdown I and II finds carry the same modus operandi of staining and modification, and that the tooth from Piltdown II likely came from the jawbone from Piltdown I. “The science showed us these hominin specimens are all connected,” says Isabelle De Groote, a paleoanthropologist from Liverpool John Moores University. “They carry the signature of a single forger.” There is only one person associated with the finds at Piltdown II, one man with means, motive, and opportunity to commit the infamous hoax: Charles Dawson. “The tie-up of Piltdown I and II means that it is more than circumstantial,” Stringer says. “I think we can show with a very high degree of certainty that he possessed the orangutan jawbone that created the fakes at both sites. It’s got to be him.”

Dawson was an experienced fossil collector who wrote or coauthored more than 50 scientific publications. He knew precisely what would excite the scientific world and how to obtain bone samples. He was also not reserved in his ambition, having written to Woodward in 1909, “I have been waiting for the big ‘find’ which never seems to come along.” Says Stringer, “Dawson got tired of waiting and decided to help things along.” He also had a history of faking discoveries, including inscribed Roman bricks. These new finds appear to acquit Woodward of fraud, but not of a surfeit of naïveté and a lack of scientific scrutiny. With his work on fossil fish long having been overshadowed by his connection to the fraud, he leaves a lesson for us: Healthy science relies on healthy skepticism.