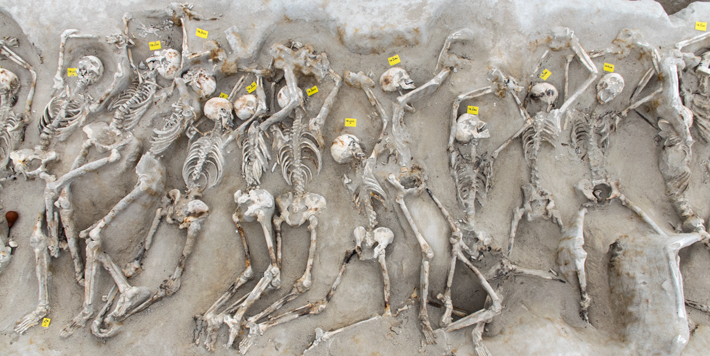 The end of the seventh century B.C. was a tumultuous period in Athenian history. Though once ruled by a king, the increasingly powerful region of Attica, home to Athens, had come to be presided over by aristocrats who maintained their hold on power through landownership and lifetime appointments. But as the century drew to a close, the political climate was primed for a new type of government—that of a single ruler, or tyrant. An evocative gravesite on the outskirts of Athens is a testament to this contentious moment in history.

Excavators at the Phaleron Delta necropolis have uncovered the remains of 80 men, shackled together at their wrists, lying in a mass grave. The most recent osteological studies have determined that the majority of the men were between 20 and 30 years old, although four were much younger, and that all 80 had been killed in the same manner—with a fatal blow to the head. The discovery of two small vases buried with them has allowed archaeologists to date the grave to the mid-to-late seventh century B.C., suggesting to project director Stella Chrysoulaki that the men were executed in the course of one of these attempts to gain political primacy. “For the first time,” Chrysoulaki says, “we can illustrate historical events that took place during the struggle between aristocrats in the seventh century and led, through a long process, to the establishment of a democratic regime in the city of Athens.”