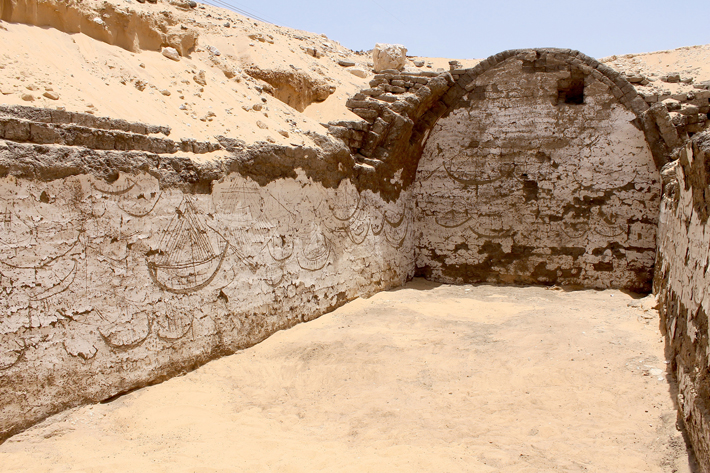 Over the past three years, archaeologists from the University of Pennsylvania Museum of Archaeology and Anthropology have been excavating an ancient Egyptian boat burial in Abydos. Although very little of the actual vessel survives, it was originally interred in a vaulted subterranean mudbrick building. The site dates to around 1850 B.C., and is believed to have been part of the elaborate funerary complex of the 12th Dynasty king Senusret III. “Boats were used during funerary ceremonies and took on a magical significance,” says lead archaeologist Josef Wegner. “The boats used in this way were ritually buried as a means of emphasizing this symbolic connection with the deceased.”

The team recently uncovered a decorative tableau that was incised into the white plaster walls along the interior of the boat building. The surviving scene extends for over 80 feet and depicts more than 120 ancient Egyptian watercraft, along with animals and floral motifs. The renditions of the boats range in size and complexity, with the largest measuring five feet long, with finely detailed masts, sails, rigging, and deckhouses. Researchers are still unsure who made these etchings, as the images do not compose a single unified scene, but appear to have been created by several different hands of varying talent. It is likely that the carvings were left by individuals who were involved in the funerary ceremonies and participated in depositing the boat.