Around 40,000 years ago, modern humans made their way into Europe, sweeping through the continent and, eventually, driving to extinction our close relatives, the Neanderthals. Exactly how that process took place is still up for debate. Tangled up in that conversation are questions about the sophistication of Neanderthals, including whether they were capable of artistic expression, or made jewelry or complex stone tools.

Archaeologists agree that hand axes and scrapers were definitely part of the Neanderthal toolkit, and modern humans are credited with developing points made of bone and antler, as well as flint blades. But in between these two types of technology, chronologically, are the so-called Châtelperronian tools, characterized by sawtooth edges and knives with convex backs. Researchers are still unsure which hominin was responsible for them. 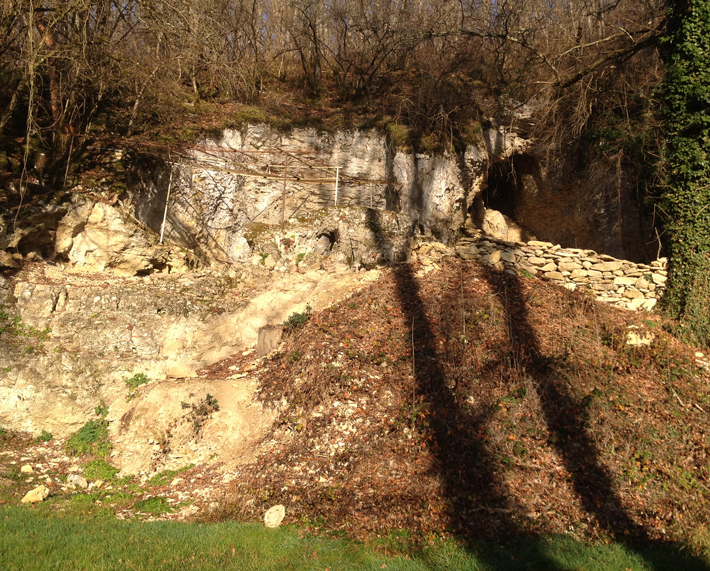 Scientists from the Max Planck Institute for Evolutionary Anthropology in Leipzig, Germany, applied a relatively new technique—probing ancient bones for the remains of proteins—to solve the riddle at the Grotte du Renne, a cave located 150 miles southeast of Paris. Châtelperronian tools were discovered there, mostly in the 1950s, in association with ornaments such as bead necklaces and pendants, as well as hominin remains. The jewelry implies the deposit was made by modern humans, but the bones appear to be those of Neanderthals.

Proteins are more robust than DNA, so they persist longer in bone, especially in warmer climates. The human and Neanderthal genomes—and, in turn, proteins—are nearly the same, so the team was on the hunt for small differences. “If you have a choice between DNA and proteins—with DNA around, you would want DNA,” says Matthew Collins, a professor of proteomics at the University of York and a collaborator in the new work. “If you want to push things further back in time, then no one’s really been looking at proteins.”

The research team analyzed 28 bone fragments found close to the Châtelperronian tools and screened them for preserved proteins. They recovered about 70. After eliminating several as stemming from possible contamination during handling, they analyzed the remainder. “There were a number that are only active in bone during the first one or two years of life,” says Frido Welker, a graduate student at the Max Planck Institute, who helped lead the research. Based on the presence of those proteins, Welker explains, and the size of the bones, the scientists concluded the remains were from the skull of a breast-feeding infant.

To figure out if it was a Neanderthal or human baby, they isolated sequences of amino acids, the building blocks of proteins, and compared them to sequences found in modern humans. They specifically looked for snippets that are either found in low frequencies in humans or show slight differences from typical human versions. If any of these were present, the bones were likely Neanderthal. They hit on one that tends only to be found in human populations in Oceania—where modern humans carry more genetic material conserved from earlier hominin populations.

As another data point, analysis of mitochondrial DNA later confirmed what the protein analysis suggested: The infant was Neanderthal. Radiocarbon dating of a section of skull put its age at roughly 42,000 years old. Thomas Higham, who runs a radiocarbon lab at the University of Oxford, and who had previously concluded that the finds at Grotte du Renne were jumbled together from two different time periods, called the new study “hugely exciting.”

“It looks as though the Châtelperronian is a Neanderthal industry,” he says. “I think it is quite possible that Neanderthals were capable of making and using personal ornaments.”