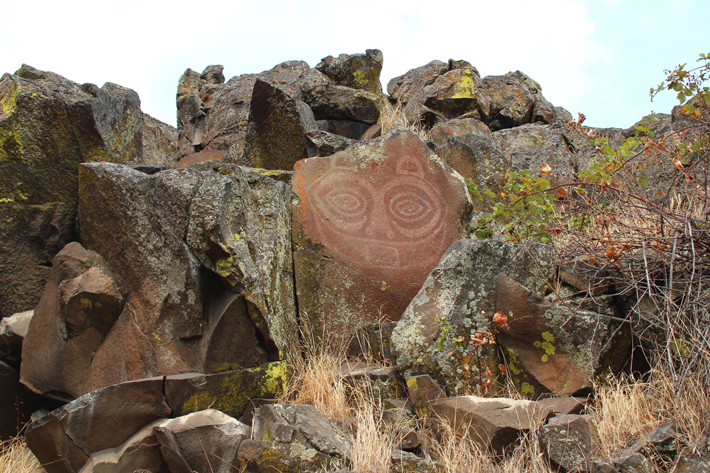 In the 1950s, the U.S. government funded the Dalles Dam Project to build hydroelectric capacity for the Northwest and beyond. The project was completed in 1957, but the rising waters behind the dam forever changed a stretch of the river valley separating Washington and Oregon. The area had long been a gathering place for people from the Warm Springs, Yakama, Umatilla, and Nez Perce tribes. Their modern descendants opposed the dam construction and feared that ancient rock art there would be submerged. Although they were not able to stop the project, the tribes were able to save approximately 40 artworks by having them jackhammered out of the cliffs. In the early 2000s, the artworks were taken out of storage and placed in a permanent outdoor display called Tamani Pesh-Wa, or “Written on the Rock,” in Washington’s Columbia Hills Historical State Park, formerly known as Horsethief Lake. There are also some petroglyphs higher on the cliff face in situ. Archaeologist Ken Feder of Central Connecticut State University says, “It’s fortunate that the locals had the presence of mind to figure out a way to preserve some of the rock art before it was lost forever to the floodwaters.” 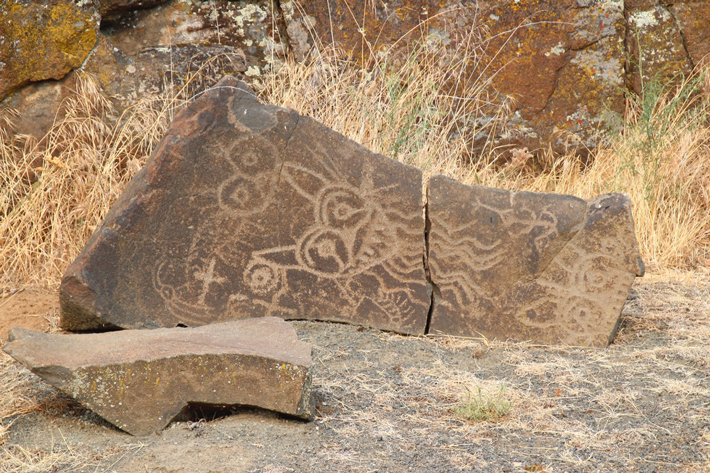 The petroglyphs of the Tamani Pesh-Wa display are now easily visible from a walking trail, and depict deer, mountain sheep, hunters, thunderbirds, owls, fish, and a creature with long flowing tentacles. One especially notable work remains high up in the cliff face, and can only be visited with an escort from the park. It is called Tsagaglalal, or “She who watches” in the Wasco-Wishram language. The legend of Tsagaglalal tells of a female chief who was concerned over what would happen to her people when she was gone. Coyote came to her and told her that soon the world would change and that women would no longer be chiefs. Coyote then tricked her and turned her into a rock, saying, “Now you shall stay here forever, watching over your people and the river.”

Close to Columbia Hills Historical State Park are the Maryhill Museum of Art and the Columbia Gorge Discovery Center, both of which house artifacts from the local tribes. In the park, the lake provides recreation, and the cliffs are known for excellent rock climbing. Visitors in the spring can expect to see beautiful fields of lupine and balsamroot.