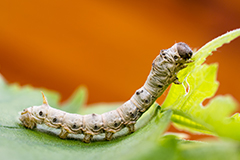 CHINA: The Neolithic site of Jiahu, where the oldest playable musical instrument was previously found, has now produced evidence of the oldest silk fibers in human history. Soil samples taken from beneath skeletons in two tombs that date back 8,500 years reveal traces of silk proteins, indicating that the deceased may have been dressed in silk garments when they were buried. This new evidence pushes back the first known silk production technology by nearly 3,500 years. —Jason Urbanus