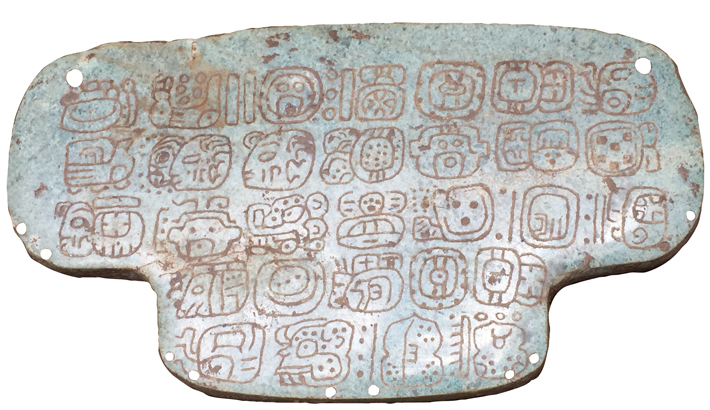 Ancient Maya rulers were seen as divine beings responsible for all aspects of life, including the weather. And for the Maya, the wind was more than just an element—it was a force that symbolized the breath of life and was fundamentally linked to the power of the king. This pectoral was likely made for and worn by the Maya king Janaab’ Ohl K’inich, who is named twice in an inscription on its back. University of California, San Diego, archaeologist Geoffrey Braswell explains that the text, which begins, “He put on the necklace for the incense-scattering ceremony,” describes a common ritual.

The Mayan glyph for wind and breath is ik, and is shaped like a T. This pectoral, which is itself T-shaped, was found in a T-shaped building, and on the front is a large, deeply incised T. “These are references to the wind, breath, and life, and specifically the wind that brings the monsoon rains,” says Braswell. The pectoral was found with a ceramic object that may have been a drum, decorated with images of the Maya god of wind and music, and a lithophone. They were likely intended as divine offerings made during one of these regular incense-scattering ceremonies.

One explanation for why this collection of artifacts was discovered in a tomb that doesn’t contain any human remains is that it was placed there to appease the god of wind at a time when climate change was adversely affecting agriculture, explains Braswell. “The pectoral remained an immensely valuable object, and there is evidence it was used for at least 60 years after it was inscribed,” he says. “It was perhaps the great heirloom of the community and the royal family.”