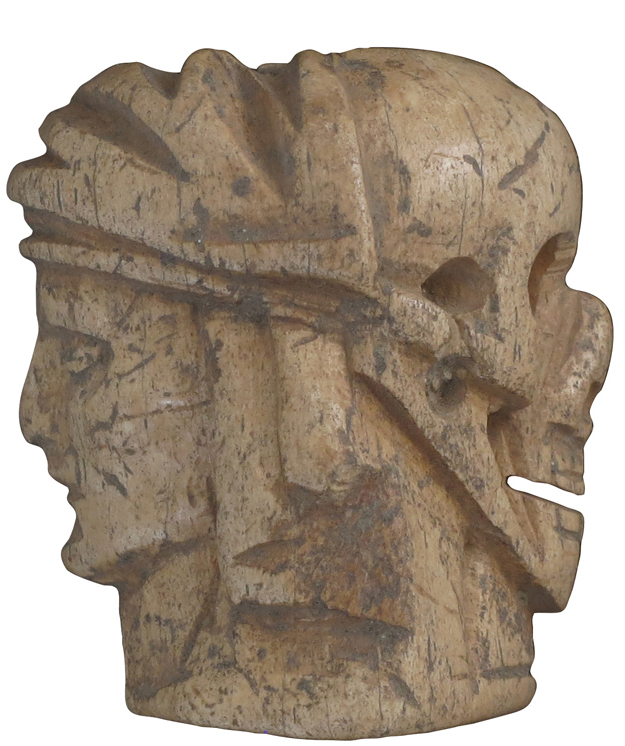 Throughout human history, people have appealed, through prayer, to a divine power or powers for hope, solace, counsel, omens, and forgiveness. For Roman Catholics, one of the central rituals of their faith is the recitation of the Rosary, a cycle of prayers used to contemplate the lives of Mary and Jesus and the mysteries of salvation. The prayers of the Rosary are sometimes said while holding a string of beads, with each bead representing a prayer. This practice dates back to at least the Middle Ages, and perhaps earlier. In England, the use of prayer beads continued until the mid-sixteenth century, when the Protestant king Edward VI banned the use of rosary beads as one of the reformations of the Church of England. This artifact is thought to have formed the pendant terminal, or end, of a set of late medieval rosary beads.

The bead, which depicts a human face on one side and a skull on the other, is an example of “memento mori,” an instruction to remember one’s mortality and a common motif in high and late medieval art. “The image of the living body in juxtaposition with the dead can be seen as an exposition of the theme of the relatively brief nature of life and the inevitability of death,” says Gloucester Cathedral excavation director Ross Shurety of Border Archaeology. Although rosary beads are fairly commonly recovered from medieval sites, memento mori elements are considerably rarer, explains Shurety. He says, “It’s possible that the design of this rosary bead was made specially to order and originally belonged to a man of some wealth and status, who perhaps depicted himself.”