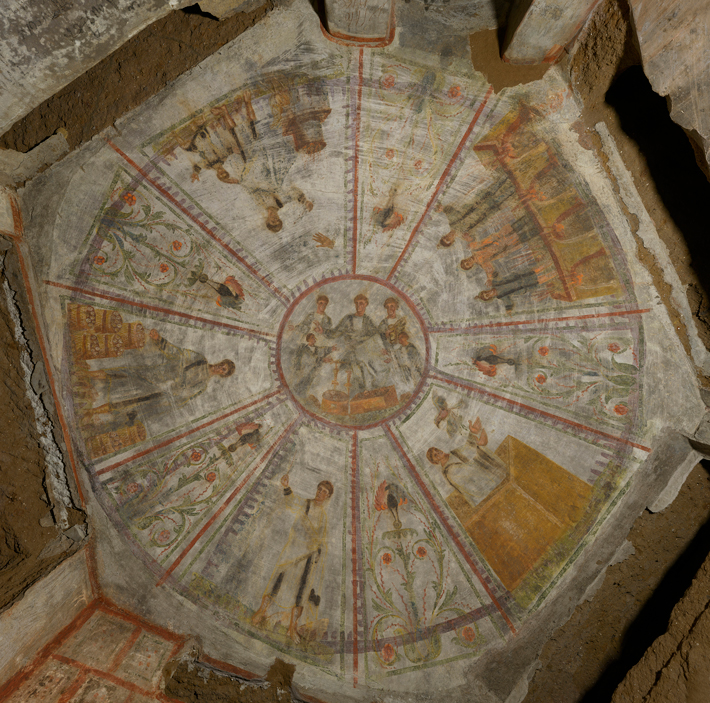 Deep in the heart of Rome’s largest catacombs, laser beams have unveiled stunning 1,600-year-old early Christian frescoes. Mixing pagan symbols with Christian images, the paintings adorn the ceilings and walls of two burial chambers in the Catacombs of Domitilla, a labyrinth of tunnels and tombs stretching over 10 miles beneath Rome near the ancient Appian Way. The crypts, carved out of volcanic tufa, were created for wealthy merchants involved in the imperial grain trade and the production of bread. They were painted around A.D. 360, a few decades after the emperor Constantine declared Christianity legal. “The chambers have long been known, but laser cleaning has removed centuries of grime, algae, and chalk, revealing elaborate scenes and new findings,” says Fabrizio Bisconti, the superintendent in charge of catacombs for the Vatican’s Pontifical Commission for Sacred Archaeology.

Led by Barbara Mazzei, restorers have been able to remove not just the black patina but also graffiti covering the frescoes. Old pagan symbols of the afterlife such as peacocks, scenes from the Old and New Testaments, and depictions of the grain trade have emerged for the first time. Such a mixture of symbols reveals the difficult shift suffered by wealthy Romans as they slowly abandoned their pagan beliefs to embrace the new Christian religion in the fourth century A.D. Says pontifical commission head Cardinal Gianfranco Ravasi, “These tombs represent the roots of Rome and of Christianity.”