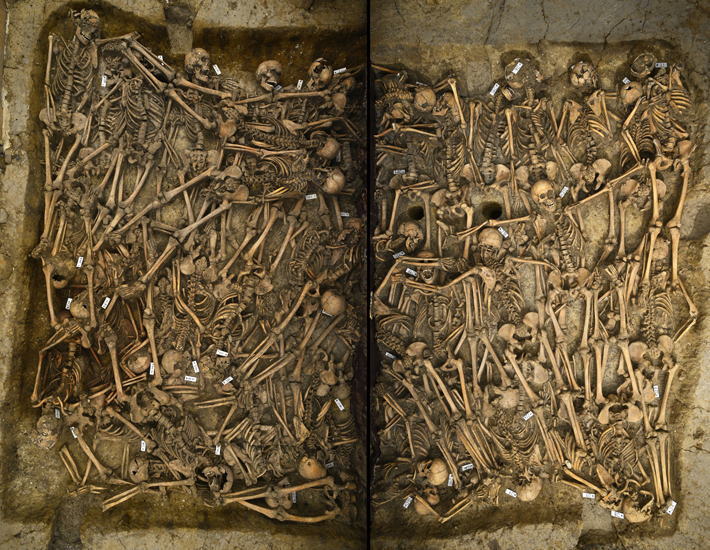 The Thirty Years’ War raged from 1618 through 1648, and at its outset pitted Protestant states against Catholic ones within the Holy Roman Empire. In 1630, Sweden’s king Gustavus Adolphus joined the side of the Protestants and led his troops to a number of victories before dying in the November 1632 Battle of Lützen. Around 9,000 others also perished in the fight, which took place in present-day Germany. In 2011, archaeologists discovered a mass grave containing 47 of these soldiers in an area where an elite Swedish unit called the Blue Brigade was reportedly cut down in a surprise attack by a Catholic cavalry unit.

The researchers, led by Nicole Nicklisch of the State Office for Heritage Management and Archaeology Saxony-Anhalt, removed the remains in a 55-ton slab of soil and brought it to the lab for study. They have now found that, by seventeenth-century standards, an unusually high number of the soldiers had been shot. “More than half of the men were struck by gunfire,” says Nicklisch, “which caused injuries that would have resulted in their deaths.” The bullet fragments found in the grave came from pistols, muskets, and carbines, the sorts of weapons used by cavalry at close range. While some of the soldiers in the grave were likely from the Catholic cavalry unit, most appear to have been their victims from the Swedish Blue Brigade.