The Race to Crack the Code 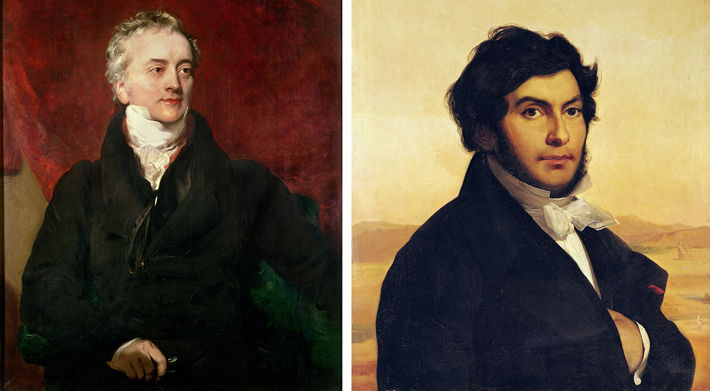 Almost immediately after it was discovered in 1799, the Rosetta Stone was recognized as the potential key to decoding hieroglyphics and the long-lost language of the ancient Egyptians. The inscription, the Third Memphis Decree, was written three times on the stone in three different scripts: hieroglyphics (the sacred script of the temples), Egyptian Demotic (the script of everyday native Egyptian use), and Ancient Greek (the language of the ruling Ptolemaic Dynasty). Although scholars were still unable to read the first two, Ancient Greek was well known, and the Greek text on the stone provided a starting place from which to finally decipher the other two. For hundreds of years European scholars had attempted in vain to translate Egyptian hieroglyphics. When news of the Rosetta Stone’s discovery reached Europe, the race was on.

Although several renowned intellectuals tackled the inscription, the competition to decipher Egyptian hieroglyphics essentially became a contest between two men, Thomas Young and Jean-François Champollion. Young was an English physician, polymath, and one of the brightest minds of his generation. Champollion, a Frenchman, was a prodigious linguist. One of the difficulties facing both men was determining whether Egyptian hieroglyphics even constituted a spoken language. Did the written characters and pictures denote letters, syllables, or words, or were they solely ideographic symbols representing an idea or action like today’s “no smoking” icons or emojis. These convey concepts, but do not represent speech.

Fueled by their rivalry, both men made progress, especially in determining that when certain hieroglyphic symbols were grouped together within an oval enclosure, or cartouche, they represented the personal name or title of a ruler. Because the Rosetta Stone inscription records the name “Ptolemaios” so frequently, it was possible to identify the cartouche and hieroglyphic characters that spelled out the Greek pharaoh’s name in the Egyptian text on the stone. It was a stunning breakthrough: Individual hieroglyphic symbols could represent letters or sounds. But while letters could be recognized, neither man knew anything about the language itself. Champollion then began to follow a different path. He looked to Egyptian Coptic, the little-known surviving liturgical language of Egyptian Christians, as he believed it might have been related to ancient Egyptian. He was right. In 1822, Champollion finally solved the riddle—he was able to read hieroglyphics. Purportedly, he rushed into his brother’s office exclaiming, “I’ve got it!” before collapsing on the floor. Champollion had discovered that while hieroglyphs were sometimes ideograms, representing an object directly—the character of a lion can actually mean “lion”—they had phonetic value as well. For example, in hieroglyphics, the lion symbol also represents the letter L, the snake the letter J, the open hand the letter D. A somewhat poignant footnote to Champollion’s work is that he never actually saw the Rosetta Stone.