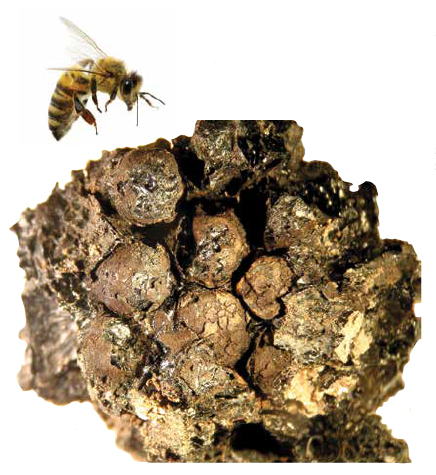 In northern Italy 2,500 years ago, Etruscans developed a unique system of beekeeping to manufacture honey, beeswax, and other products. Archaeologists working at the site of Forcello recently gained rare insight into ancient beekeeping when they uncovered the charred and melted remains of honey, honeycombs, and honeybees in a workshop that had burned down between 510 and 495 B.C. Researchers conducted chemical and palynological (pollen) analyses of the material to determine not only the composition of Etruscan honey, but also what types of plants bees were collecting pollen from two and half millennia ago. While bees in northern Italy today feed abundantly on nonnative plants that have been introduced to the region, during the Etruscan period, bees were foraging from aquatic sources such as water lilies and the flowers of wild grapevines found along shorelines. This produced a kind of grapevine honey that is completely unknown today. Since these plants were not particularly abundant around Forcello, experts believe that Etruscan beekeepers maintained beehives on boats that moved along river courses and took the harvested honeycombs back to their workshops to extract the honey. “We have tried to study the finds and their context from all possible angles and, surprisingly, we ended up having very strong indications of a nomadic form of beekeeping,” says New York University researcher Lorenzo Castellano. In fact, a passage from the first-century A.D. writer Pliny the Elder’s Natural History mentions a town only about 12 miles from Forcello, and the historian discusses the movements of the beehives by boats. Says Castellano, “Our finds, which are more than five centuries older, appear to confirm Pliny’s narrative.”