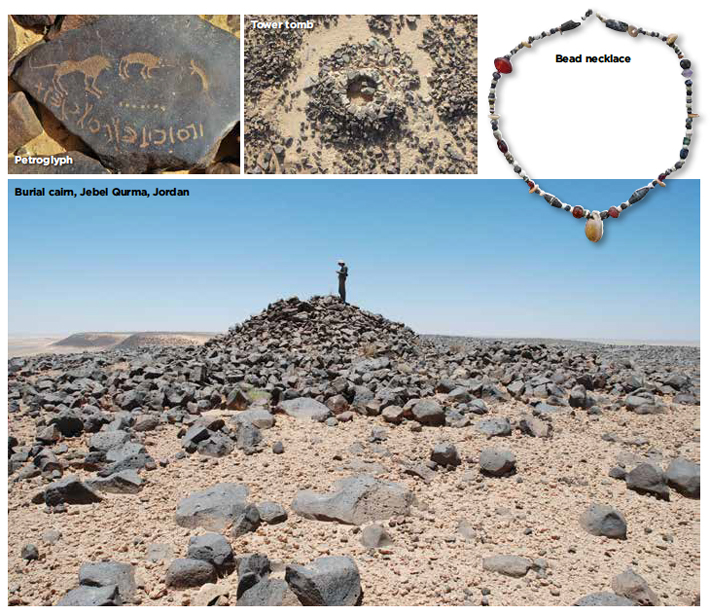 The Jebel Qurma region of northeast Jordan is today an almost uninhabitable stretch of land marked by desert wasteland and basalt hills. However, current surveys in the area have revealed a wealth of archaeological monuments that tell a story of a different time. Housing foundations, former campsites, rock art, inscriptions, and hundreds of burial cairns—piles of stones heaped over human inhumations—have recently been identified and attest to once-thriving periods of human occupation. While the evidence shows that human settlement was often centered in secluded areas, the dead were buried in visible, prominent locations on hilltops and high plateaus. One cemetery dating back 4,300 years indicates that people were living in the area from at least the Early Bronze Age. Toward the end of the first millennium B.C., a sophisticated culture that constructed large and complex “tower tombs” inhabited the region. These tombs were built from stones weighing more than 600 pounds each, could reach a height of 16 feet, and could be five feet in diameter. “Our research yields wholly new data and insights,” says Jebel Qurma Archaeological Landscape Project director Peter Akkermans. “Piece by piece we are beginning to understand the archaeology of the region and its importance for Levantine and Near Eastern archaeology in general.”