One of history’s greatest “what ifs” is the question of what would have happened had the Germans been able to develop nuclear weapons during the Second World War. The Wehrmacht’s effort to do just that, called the Uranverein, or “Uranium Club,” began in 1939 when German Army physicist Kurt Diebner began to research the potential military applications of nuclear fission. By year’s end, the renowned German physicist Werner Heisenberg had expressed his belief that nuclear fission chain reactions, and thus, eventually, nuclear bombs, might be possible, but only if he had access to enough of a singular substance known as heavy water.

No facilities for manufacturing heavy water existed in Germany. But on April 9, 1940, the Germans invaded Norway, and in so doing acquired the Vemork Norsk Hydro Plant outside Rjukan, which, in 1934, had become the world’s first commercial heavy water plant. Heavy water, or deuterium oxide, exists when the normal hydrogen atoms are replaced with the hydrogen isotope deuterium, which has both a neutron and proton in its nucleus, thus making it “heavier” than proton-only hydrogen. In nuclear fission reactions, whether in an atomic bomb or a nuclear power plant, heavy water is used to slow down and regulate the reaction. Once Germany controlled Norway, it controlled not only most of the world’s existing supply of heavy water, but also Europe’s only means of producing it. Soon, the Allies believed, Heisenberg would have all he needed to fuel his “uranium machine,” and the Uranverein would be well on the way to developing a nuclear bomb.

Fear of an atomic Germany was the driving force behind not only the race for the Allies to develop their own nuclear bomb capability—and thus the Manhattan Project—but also for their determination to destroy Vemork. Hence, the British Special Operations Executive (SOE), which was responsible for sabotage operations, initiated plans to cripple or obliterate the plant’s heavy water production facility in November 1942.

After that attempt failed, the SOE conceived of Operation Gunnerside. For Gunnerside, Norwegian fighters trained in Scotland joined members of the earlier team who had remained in Norway. The operatives’ approach to Vemork on the night of February 27, 1943, entailed climbing down—and then scaling—an icy 656-foot-ravine. Upon entering the plant, the team went immediately to the heavy water room, placed their explosives, and exited the facility before the explosives detonated, destroying the heavy water production capability, and also more than 100 gallons of the priceless liquid. 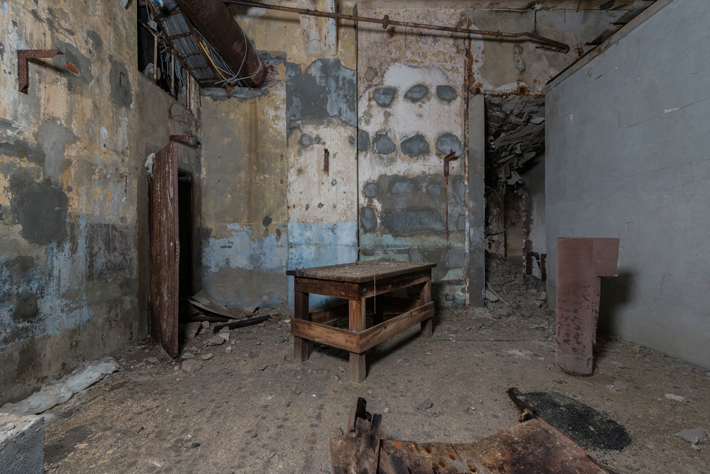 Operation Gunnerside has been called the most successful act of sabotage of World War II. But the actual heavy water room where it took place had not been documented or studied since Gunnerside. Norsk Hydro, which had ultimately resumed operations, ceased producing hydrogen and heavy water at the plant in 1971, and the abandoned factory was demolished six years later.

In September 2017, in anticipation of the seventy-fifth anniversary of Gunnerside, archaeologists Sindre Arnkværn and Line Grindkåsa of the Telemark County Council began a project to explore what might be left among the rubble. Several weeks after beginning their work, the team reached the basement, where, surprisingly, they found the heavy water room intact and in very good condition.

Joachim Rønneberg, Gunnerside’s leader, is now 98 years old and is the only saboteur still alive. For many years, Arnkværn says, Rønneberg has wished for the plant to be excavated. “If we are fortunate enough to interview Mr. Rønneberg and to learn specifically where the events unfolded, that will be tremendous,” he says. “Nothing can compare to the excitement of excavating something people will actually be able to walk into and of conveying the story of one of the most remarkable events of the Second World War.”