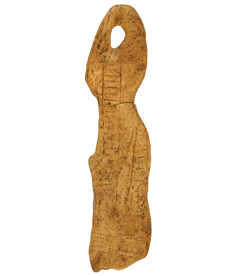 A 15,000-year-old bone pendant found at Vlakno Cave in Croatia may be a late type of Venus figurine, such as the famous Venus of Willendorf, which dates to more than 24,000 years ago. The Croatian Venus is a more slender and abstract human figure than the zaftig woman of Willendorf. The geometric pattern on the bone is similar to patterns found on other pieces of art from the Epigravettian period, during which sea levels were approximately 400 feet lower than they are now. What is today the northern Adriatic Sea was a broad plain that supported large herds of game animals hunted by the people at Vlakno. Other than the Venus pendant, however, no art produced by the Epigravettian people has turned up. Some perforated deer teeth and seashells are the only other symbolic artifacts found at the site.