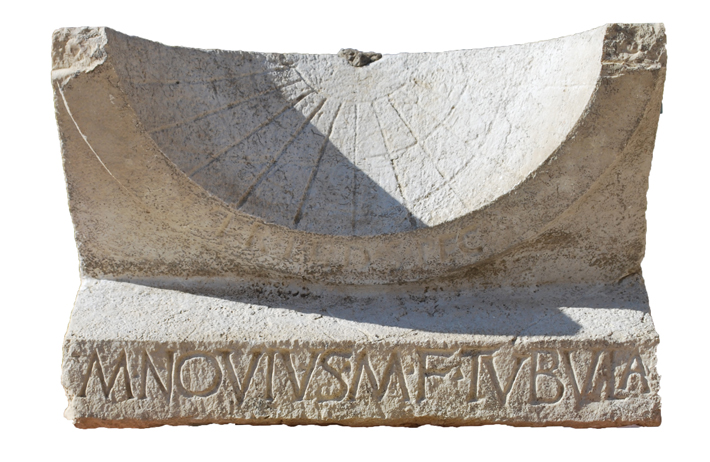 In the mid-first century B.C., a man named Marcus Novius Tubula, son of Marcus, was elected to one of Rome’s most ancient offices, that of tribune of the plebs. For Marcus, the event was significant enough to celebrate by commissioning a sundial to be displayed in a prominent spot in his hometown. He had his name inscribed on the base of the sundial, and paid for the whole thing “De Sua PECUNIA,” or with his own money. The plebeian tribune, established in 494 B.C., was the first office to be open to the common people and was intended to check patrician abuse of power. During most of the Republican period (509–27 B.C.), it was one of the most powerful offices in Rome—although by the time Marcus became tribune the position had lost much of its influence.

Several hundred ancient Roman sundials have been found, but very few are in such good condition—and even fewer are inscribed—making the example from Interamna Lirenas a rare find. What is especially intriguing is that a tribune of the plebs could have come from this “average” town 50 miles from the capital. “The fact that someone managed to gain access to a relatively important public office in Rome says that some of the town’s inhabitants had the material resources and personal connections necessary to pursue such political ambitions,” says Alessandro Launaro of the University of Cambridge, who is directing the exploration there. “This casts new light on the level of involvement in Rome’s affairs to which individuals hailing from this and other relatively secondary communities could aspire.”