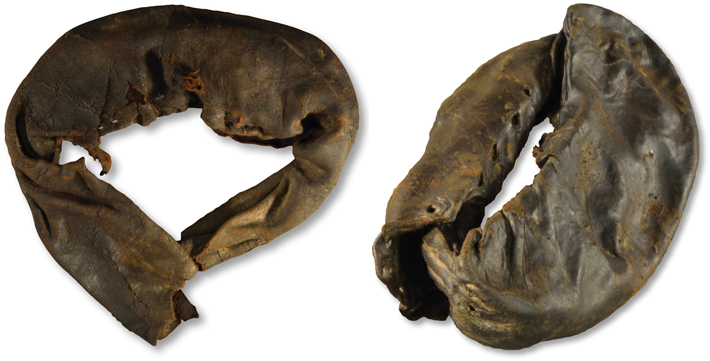 British journalist and sportswriter Pierre Egan was the first person to refer to boxing as the “sweet science,” in an article he penned in 1813. At that point, the sport had already been popular for thousands of years. Boxing is mentioned in Homer’s Iliad and was practiced at the Olympics beginning in the seventh century B.C. There are life-size Hellenistic bronze sculptures of boxers, and depictions of boxers from the classical world decorate Minoan wall paintings, Athenian vases, and Roman mosaics.

No actual boxing gloves, however, had been found until recently, when, at the Roman fort of Vindolanda near Hadrian’s Wall in northern England, these two examples were discovered on the floor of a cavalryman’s barrack alongside a pile of horse gear, shoes, wooden bath clogs, gaming counters, and a nearly complete sword. “There are references to boxing in the Roman army,” says site director Andrew Birley. It must have been seen as a good form of training, exercise, and entertainment. “What is so interesting about the gloves, though, is that, while similar, they are also different from each other. The smaller of the two is soft and has layers of interwoven leather in the glove’s main padding. You can still see the imprint of the boxer’s knuckles in the leather.” Birley thinks this is a sparring glove, “offering good protection to the wearer and moderate protection to the person being punched.” The other, larger glove was filled with straw and offered ample protection for the knuckles, but also had an additional feature—a heat-hardened leather strip wound around an edge that would easily draw blood if used in a slashing motion. “One glove is for practice,” says Birley, “and one is for fighting.”