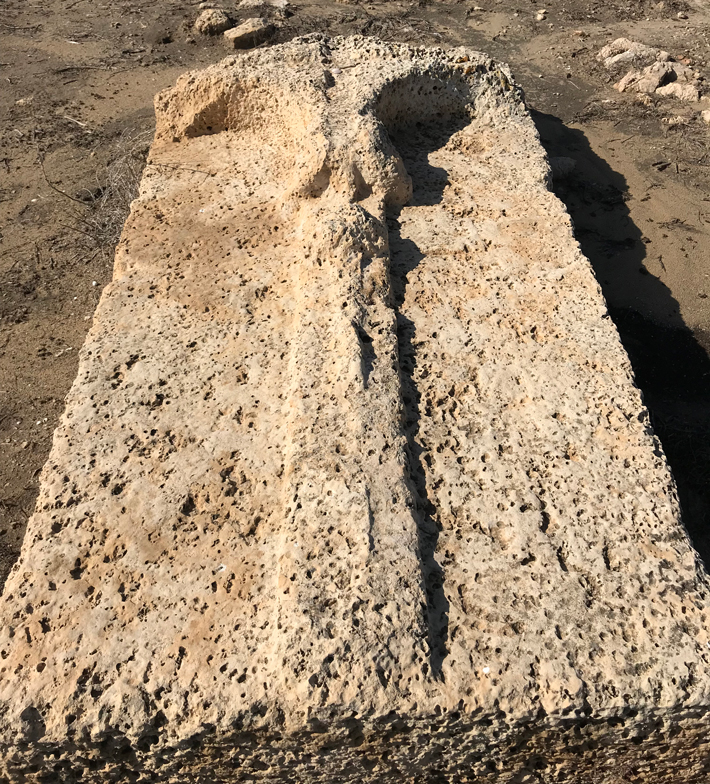 Athlit Castle, which was built by the Knights Templar in the early thirteenth century, now sits inside the perimeter of an Israeli Defense Force training camp on the coast between Haifa and Tel Aviv. Its cemetery, the largest known Crusader resting place in the Middle East, lies just outside the camp’s fence. Here, over a period of about eight decades, the remains of thousands of people were buried in an orderly rectangular space a football field long, and almost as wide.

There are many unusual features of the Athlit cemetery that seem to contradict conventional thinking about European burial practices of the time. In the thirteenth century, the castle stood above a thriving town to the east and the fertile countryside beyond, but, unusually, the cemetery was located some distance away, close to the beach. Furthermore, all other known Crusader cemeteries, with the exception of one against Jerusalem’s walls, include a church or chapel—but not Athlit. In a 2006 survey, archaeologist Jennifer Thompson, then of Cardiff University, speculated that the cemetery was in use before the town and its church, which may never have been completed, and remained the sole place for burial through the life of the community.

And while Crusaders in other locations—like most medieval Christians—typically were interred with their feet facing east, in anticipation of Christ’s return from that direction, Yves Gleize of the University of Bordeaux, who has been excavating the cemetery for the past four years, notes that the Athlit burials are generally oriented with their heads to the castle and their feet to the northeast.

It is the number of burials, however, that is most exceptional. British archaeologist C.N. Johns, who excavated the site in the 1930s, counted 1,700 graves, but Gleize puts the number at a minimum of 5,000, and perhaps as many as 8,000. “That means an average of five or so dead per month, which is too many for just the castle or even town inhabitants,” he says.

There is little doubt the graves are from the brief period between 1218 and 1291, given the thirteenth-century coins and potsherds Gleize has uncovered, but where all those people came from remains unclear. They were almost certainly Europeans, as Gleize has determined that the Athlit dead were primarily buried in shrouds and lowered into pits that then were covered with a lid anchored with stones, the common method in France in that period. Some may have been pilgrims who chose to be buried at Athlit, perhaps due to the proximity to relics in the castle’s chapel, as might be the case of a man in his 50s found with his arms folded over his chest and his hands in what may have been an attitude of prayer. Metal pieces found next to his skeleton likely were part of a staff, a common accessory for pilgrims and the first example found in the region. Others may have been victims of violence, such as a man with a bashed skull and an arm injury that seems to have been inflicted by a heavy sword. Gleize speculates he could have been a Templar victim of a Muslim siege.